The House Judiciary Subcommittee on the Constitution, Civil Rights and Civil Liberties today held hearings on the subject of reparations for African Americans "for the perpetration of gross human rights violations and crimes against humanity on African slaves and their descendants." 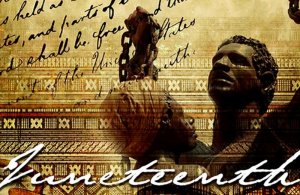 The hearing comes on the anniversary of "Juneteenth," the day in 1865 when slaves throughout the confederacy, one of the last being in Galvaston, Texas, learned the news that the Civil War had ended and they were free.

History
An estimated 17 million people, primarily from African countries, were victims of the transtlantic slave trade. One of history's greatest inhumanities, it was also the world's largest deportation and one that created a new world economy in the 18th century.

Approximately four million of those were were torn from their homes and sold into slavery in America between 1619 to 1865. Slaves, particularly in the South where they labored without pay, became the backbone of the economy.

Though slaves had been declared free by President Abraham Lincoln's 1863 Emancipation Proclamation, it was not until the end of the Civil War in 1865, and the ratification of the Thirteenth Amendment to the United States Constitution, that most were actually given their freedom. 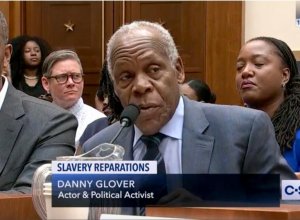 The Thirteenth Amendment, which applies to the actions of private citizens, abolished slavery and involuntary servitude, except as punishment for a crime.

After the war, the newly freed slaves were promised "40 acres and a mule" as compensation,  but following the assassination of President Lincoln in 1865, President Andrew Johnson overturned the agreement.

In the District of Columbia, which fell under direct Federal control, slave owners were actually compensated for the loss of slaves, their "property." The practice of "compensated emancipation" was exercised more broadly in other countries.

It would be many generations, however, before even the most basic of citizen rights were granted to African Americans.

"Jim Crow" state and local laws, which mandated racial segregation in public places, were enacted throughout the South during the Reconstruction era after the war, remained in place until passage of the Civil Rights Act of 1964.

Although the the 15th Amendment, ratified in 1870, prohibited states from denying a male citizen the right to vote based on "race, color or previous condition of servitude," it was not until the Voting Rights Act of 1965 that measures to protect African Americans' voting rights were written to law. 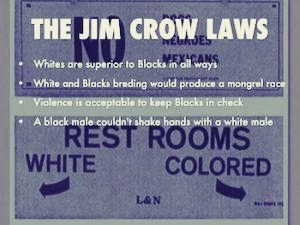 Although President Harry Truman officially ended segregation in the US Armed Forces in 1948, black veterans were not granted full benefits under the G.I. Bill until decades later.

Experts also attribute the current wealth gap to result of slavery and systemic discrimination. According to the Federal Reserve, in 2016, the median income of African Americans was $17,409, only one-tenth that of white Americans at $171,000.

These are just a few of the issues regarding the damage done by slavery and its legacy that a commission would study.

Repairing History
The issue of compensating descendants of slaves is one that has gathered momentum in recent years.

Although former Congressman John Conyers Jr (D-MI) introduced a bill to create a congressional commission and study on reparations every year from 1989 until his resignation in 2017, his proposal has not held serious promise until now, under a Democratic-controlled House. 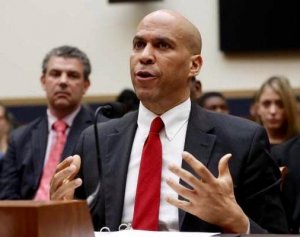 Booker: "It is a cancer on the soul of our country...This idea that it is just about writing a check from one American to another falls far short of the importance of this conversation" (AP)

In 2016, the United Nations' Working Group of Experts on People of African Descent encouraged Congress to pass H.R.40, the Conyers bill, stating, "Despite substantial changes since the end of the enforcement of Jim Crow and the fight for civil rights, ideology ensuring the domination of one group over another, continues to negatively impact the civil, political, economic, social and cultural rights of African Americans today."

H.R.40, introduced in the 116th Congress by Congresswoman Sheila Jackson Lee (D-TX), has the support of 64 co-sponsors, all Democrats. A companion bill, S.1083, introduced by Senator Cory Booker (D-NJ), has 12 co-sponsors (11 Dems, 1 Independent) in the Senate.

Booker's presidential primary opponents have also waded into the discussion, drawing more public attention to the issue. A majority are supportive of H.R.40 or advocate for some form of addressing reparations through economic, educational and other programs.

The bill, however, faces open opposition in the Republican-controlled US Senate. Majority Leader Mitch McConnell (R-KY) this week said, "I don't think reparations for something that happened 150 years ago, for whom none of us currently living are responsible, is a good idea."