History will credit Mondale, a former US Senator and the 42nd Vice President who ran unsuccessfully for President in 1984, as the first major party candidate to choose a woman as his running mate. 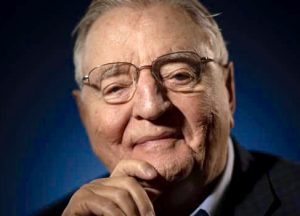 Mondale at his Minneapolis home in April 2019. He passed at age 93 (Star Tribune)

By age 20 he was entrenched in Minnesota politics as an organizer for Hubert Humphrey's successful Senate campaign in 1948, delivering the staunchly Republican Second Congressional District for Humphrey, who would become a lifelong mentor. 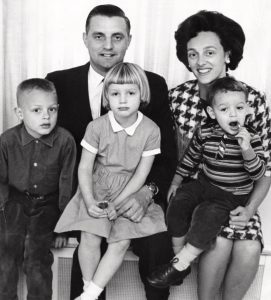 In 1955, Mondale married Joan Adams, an artist and graduate of Macalester College, whom he met on a blind date. They would have three children: Ted, Eleanor and William. Joan would later be known as "Joan of Art" for her promotion of the arts as America's Second Lady.

During this time Mondale worked on several campaigns for Orville Freeman, one of the founding members of the Minnesota Democratic-Farmer-Labor Party. After Freeman's successful 1954 campaign for Governor, Mondale managed his 1958 reelection while working in private practice. 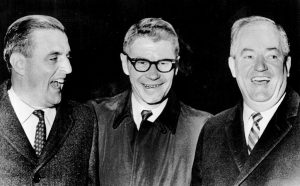 US Senator
When Hubert Humphrey was elected Vice President in 1964, DFL Governor Karl Rolvaag appointed Mondale to fill Humphrey's vacant Senate seat. Mondale was elected to a full Senate term in 1966 and, in 1972, declined an offer by Democratic presidential candidate George McGovern to be his vice-presidential running mate.

Instead, Mondale was reelected to the Senate that year with almost 57% of the vote, even as President Richard Nixon carried Minnesota. 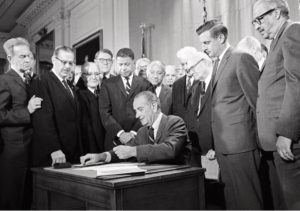 After the assassination of Dr. Martin Luther King in 1968, Mondale helped pass the Civil Rights Act of 1968, which included the Fair Housing Act that prohibited racial discrimination in housing.

Mondale' considered his work on the issue to be among his "proudest -- and hardest fought -- achievements."

As chairman of a Senate Committee on Equal Educational Opportunity, he was credited with blocking a stream of anti-busing bills, and led a successful fight to win unemployment benefits and legal services for migrant workers.

He championed government intervention to help the poor and the elderly, sponsored the first federal law to crack down on child abuse, and was a key player in the creation of Title IX, the federal law that gave women equal access to publicly funded sports programs. 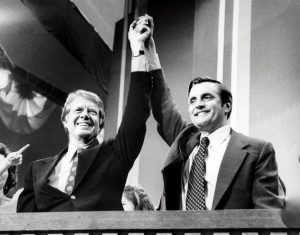 "My Senate years were the happiest of my public career," he said years later in a lecture in the Senate chamber. "I found my sweet spot here."

The ticket of Carter-Mondale was elected with 50.1% of the vote, defeating incumbent President Gerald Ford and his running mate, Senator Bob Dole.

Mondale transformed the office of the Vice President, serving as a genuine partner to Carter, with full access to intelligence briefings, his own office near the president's, and shared staff. 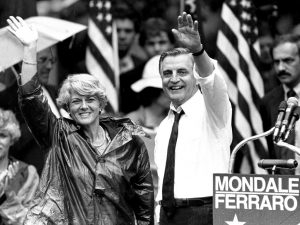 Ferraro Family: Mondale a "hero who opened the doors of opportunity and forever changed what was possible in our country for women and girls" (JSmith/AP)

Carter and Mondale's time in office, however, was marred by a depressed economy and they lost the 1980 election to Republicans Ronald Reagan and his running mate, George H. W. Bush, 41% to 50.7%.

In 1984, Mondale won the Democratic presidential nomination and made history by naming a woman, New York Congresswoman Geraldine Ferraro, as his running mate. Mondale-Ferraro lost the election by a landslide to incumbents Reagan and Bush, 40.6% to 58.8%.

In 1993, President Bill Clinton appointed Mondale US Ambassador to Japan, a post he held until 1996.

In 2002, Mondale became the last-minute choice of the Minnesota Democratic-Farmer-Labor Party to run for Senate after Democratic Senator Paul Wellstone was killed in a plane crash less than two weeks before the election. Mondale narrowly lost the race to Saint Paul mayor Norm Coleman. 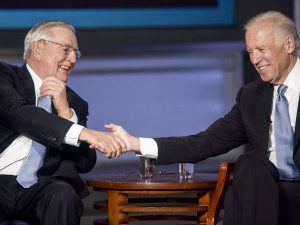 Mondale returned to his law practice, taught part-time at the University of Minnesota's Hubert H. Humphrey School of Public Affairs, and remained active in the Democratic Party.

"Dear Team," Mondale wrote. "Well my time has come. I am eager to rejoin Joan and Eleanor. Before I Go I wanted to let you know how much you mean to me. Never has a public servant had a better group of people working at their side! Together we have accomplished so much and I know you will keep up the good fight. Joe in the White House certainly helps. I always knew it would be okay if I arrived some place and was greeted by one of you! My best to all of you!" Fritz