The historically rocky road to 2022 redistricting is far from over, with a number of the 37 already-approved state reapportionment plans making their way through challenges in the courts.

In the win column for each of the major political parties, at least two court decisions have determined the immediate fate of the final maps in two key states - at least for this November's elections. 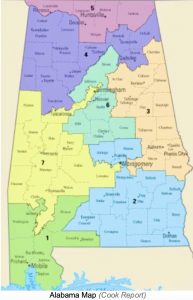 Alabama
Yesterday, in its first major redistricting decision under the court's 6-3 conservative majority, the US Supreme Court agreed to hear an appeal by Alabama to a District Court ruling that rejected the state's Republican-drawn reapportionment map, passed in November, as violating the Voting Rights Act by diluting the power of Black voters.

Although 27% of Alabama voters are black, only one of its seven congressional districts is favorable to a Black representative. Accordingly, in January, a panel of three federal judges, including two justices appointed by former President Trump, sent the GOP's map back to the state legislature, ordering that it be redrawn to include a second district in which Black voters could elect a representative of their choice.

The state appealed the decision to the US Supreme Court and the justices stayed the lower court ruling until the case can be heard this fall, leaving the GOP map in place for this year's elections.

While SCOTUS' 5-4 decision provided no explanation, which is customary in emergency petitions, Justice Brett Kavanaugh objected to a change in maps this close to the election, writing "When an election is close at hand, the rules of the road must be clear and settled."

In his written dissent, Chief Justice John Roberts, who was joined by the court’s three liberal members, countered that "In my view, the District Court properly applied existing law in an extensive opinion with no apparent errors for our correction."

North Carolina
Last Friday, the North Carolina Supreme Court ruled that the state's new GOP-drawn redistricting map, passed in November, violated the state's constitutional protections of free elections, freedom of speech and equality, stating the legislature violates the constitution "when it deprives a voter of his or her right to substantially equal voting power on the basis of partisan affiliation."

The decision overturns a January 11 ruling by a District Court that rejected a challenge to the map which claimed partisan gerrymandering and racial vote dilution. The map gave the GOP control of 10 of the state's 14 congressional districts, including a new seat picked up due to the growth in the Raleigh, Charlotte and Durham areas under the census.

In its 4-3 decision, the State Supreme Court ruled that new maps must be redrawn by the legislature no later than February 18, accompanied with an analysis of how they calculated the boundaries fairly. If approved, that map would be used for the May 17 primaries.

Ohio
The Ohio Supreme Court rejected new legislative maps for State House and Senate districts for the second time yesterday, sending the Ohio Redistricting Commission back to the drawing board.

In September, Ohio’s high court struck down the first set of GOP-gerrymandered maps, saying the plan unfairly favored Republicans in defiance of a constitutional amendment passed by Ohio voters in 2015 that said maps should favor parties to win districts in proportion to their share of the statewide vote.

In Monday's ruling, the court sided with the League of Women Voters of Ohio, which filed an objection to the legislative map, adopted on January 22 by a party-line vote, and which the court ruled was "invalid in its entirety.”

The court gave the commission a deadline of February 17 to approve a new map that reflects Ohio's 54% Republican, 46% Democrat split.

The decision to toss out the maps once again causes massive uncertainty for Ohio's primary, set to take place May 3. The court's opinion, however, states the legislature “has the authority to ease the pressure that the commission’s failure to adopt a constitutional redistricting plan has placed on the secretary of state and county boards of elections by moving the primary election, should that action become necessary.”

While America recovers from the election and prepares for a much needed holiday, Louisiana has one more Election Day left.