Nonreligious Americans are young, diverse and the fastest growing "religious demographic" in the country, and, like so many of our partners in civil rights, one under attack by our current President.

Join SDA for its inaugural virtual event at the 2020 Democratic Convention. Hear from Members of the Congressional Freethought Caucus, state lawmakers, leading scholars and activists who are defending the separation of church and state, mobilizing nonreligious voters, and advocating for religious freedom for people of all faiths and none.

While recognized at last year's August Democratic National Committee (DNC) meeting as a formal constituency of the party, this "Religiously Unaffiliated Demographic" -- which now accounts for 25% of the overall American population and 35% of those under the age of 30 -- is a critical and underestimated force among US voters.

In 2018, the "largest religious group" within the Democratic Party, made up 17% of the electorate. With targeting, they have the potential to turn out considerably more.

There is much about this election that is historic and secular voters, for the first time, have a seat at the table. To learn more how you can engage this important voting bloc, join the Secular Democrats of America this Tuesday. 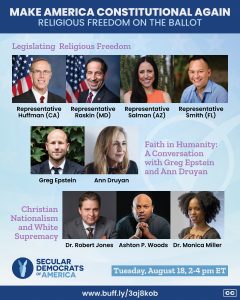 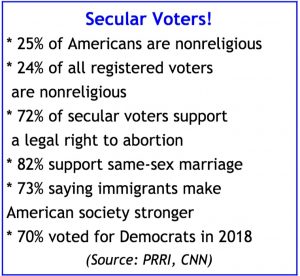 June 18, 2018 See the Nationals play the Orioles this Thursday (or send a friend!) from just twelve rows above the Nat’s dugout!!   Enter by 5:00pm today to win four tickets to this...