The Democratic National Committee has recognized "non-religious" as an official constituency of the Party, marking the first time a major US political party has openly courted religiously unaffiliated people nationwide. 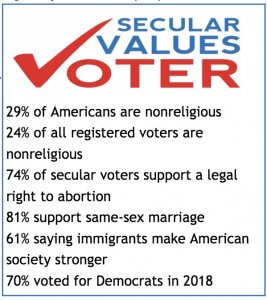 At last month's summer meeting in San Francisco, California the DNC Resolutions Committee voted unanimously, with one abstention, to recognize the "Religiously Unaffiliated Demographic" -- which now accounts for 25% of the overall American population and 35% of those under the age of 30.

There are a growing number of Secular Caucuses in state Democratic parties, including Arizona, Nebraska, Texas, and Nevada, which sponsored the resolution.

The rollback of numerous civil and religious protections under the Trump Administration has further alienated secular, or non-religious voters, who generally advocate for church and state separation, science and reason-based policymaking.

In 2018, the nonreligious, now recognized as the "largest religious group" within the Democratic Party, made up 17% of the electorate. With targeting, they have the potential to turn out considerably more.

According to the Center for Freethought Equality, which lists over 70 federal, state, and local elected officials who identify with the atheist and humanist community, a record number of openly nonreligious candidates are running for public office. 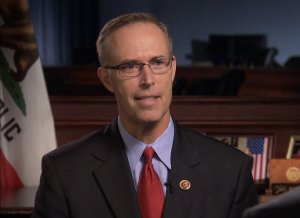 A 2019 study by the Center shows that, among pro-choice, pro-marriage-equality Democratic voters, 72% say a candidate being atheist would make no difference in their vote, and 10% say they would be more likely to vote for an atheist candidate.

The August 22nd DNC resolution declares that "religiously unaffiliated Americans overwhelmingly share the Democratic Party's values." It also condemns those who use "misplaced claims of 'religious liberty' to justify public policy that has threatened the civil rights and liberties of many Americans, including but not limited to the LGBT community, women, and ethnic and religious/nonreligious minorities." 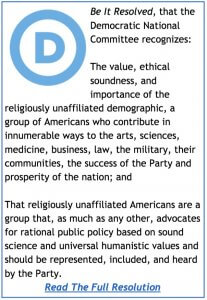 The Secular Coalition, a member of 19 member-organizations that advocates for religious freedom and the visibility of, and respect for, nontheistic viewpoints, praised the resolution.

"America was founded as a secular government charged with representing and protecting the freedoms of people of all faiths and none - I am proud to see the Democratic Party take that to heart by bringing secular Americans into the fold," said Sarah Levin, the Coalition's Director of Governmental Affairs.

Find a Secular Caucus in your State

Check Out new Updates to our 2020 Presidential Primary Calendar