They should go back to "the crime infested" countries from which they came. All four are US citizens.

"The Squad," which President Donald Trump viciously and prejudiciously attacked on twitter Sunday, also includes Minnesota Congresswoman Ilhan Omar. A Somali-born refugee who immigrated to the United States at age twelve after having spent part of her life in a Kenyan refugee camp, Omar is an example of what used to be known as the American Dream.

In a Monday afternoon press conference, the four female lawmakers responded to Trump's tweets, seemingly provoked by their stance on immigration. Pressley denounced the comments as a "disruptive distraction" from a "callous, chaotic and corrupt" administration.

Tlaib, who, along with Omar, are the only Muslim women in the House, called Trump's tweets a continuation of his "racist, xenophobic playbook" and advocated for impeachment of the president. 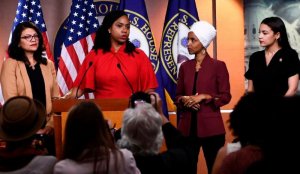 Yesterday, the US House of Representatives voted 240-187 to formally condemn Trump's use of "racist comments that have legitimized and increased fear and hatred of new Americans and people of color."

The vote came after a separate, but equally dramatic debate led by Republicans, to have a statement made by House Speaker Nancy Pelosi in a floor speech stricken from the record. Pelosi called Trump's tweets "disgraceful and disgusting and the comments were racist."

While the contentious day ended with the first formal rebuke of a sitting President in over 100 years, the action itself is non-binding and carries no penalties.

Under House rules, a single member of the House can force an impeachment vote.

Speaker Pelosi and Democratic leadership have opposed a vote until after the multiple investigations against President Trump are completed. The House may vote to proceed with impeachment, send the resolution to the House Judiciary Committee or table it.

In the interim, the country also awaits the outcome of the nationwide series of deportation raids of undocumented immigrants ordered by President Trump last weekend.

September 2, 2021 At 11:56pm Tuesday night, the Whole Women’s Health Clinic in McAllen, Texas serviced its last client, then shut its doors, ending the final hours of legal abortion care in...