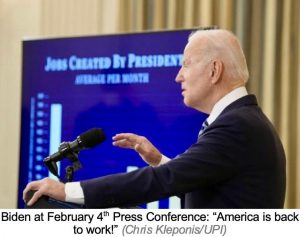 President Joe Biden took a victory lap last week with the release of the unexpectedly strong jobs reports for January and, overall, historically strong employment gains over the past year.

At a press conference on Friday, the president said, "history has been made here," reporting that 467,000 jobs were created in January and, that in his first year of office, the United States recorded 6.6 million new jobs.

That gives Biden the strongest first year of job gains of any president since the government began collecting data in 1939.

The President added that the news "comes alongside the largest drop in the unemployment rate in a single year on record ... and the strongest economic growth this country has seen in nearly 40 years," pointing to the success of his American Rescue Plan and passage of the Bipartisan Infrastructure Law. 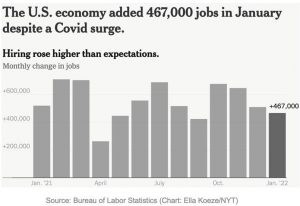 The jobs report is used by investment firms, corporations and investors to gauge the overall health of the economy.

As the numbers often get significant revisions long after their initial release, the report is less a predictive than a barometer -- providing a snapshot of the health of the economy and whether it is working for ordinary Americans.

Analysts anticipated a less robust jobs report given the record-setting spike in coronavirus cases in January that kept millions of workers at home and upended many parts of the economy, closing schools and businesses. 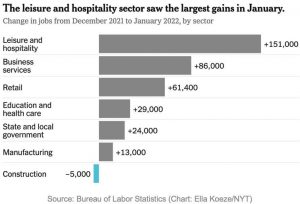 The unemployment rate, however, has dropped precipitously since the worst of the pandemic, and wages rose a rapid 5.7% over the last year.

It is good news for the administration and a public that, stressed about their economic prospects under a seemingly endless pandemic and rapid inflation, has shown waning confidence in Biden's handling of the economy.

A January 10-17 survey of US adults by Pew Research Center found that just 44% of participants were confident in Biden's ability to make good decisions about economic policy, down from 56% in March of 2021.

President Biden, characteristically, credited the “extraordinary resilience and grit of the American people."

March 12, 2020 While the race for delegates has narrowed to a two-person race between Joe Biden and Bernies Sanders, many are asking: what happens to the pledged delegates already allocated to...