This weekend marks the 50th Anniversary of the first Moon landing when Neil Armstrong spoke those famous words as he stepped down off the ladder of the Eagle lunar lander.

Along with fellow astronauts Buzz Aldrin and Michael Collins, Armstrong navigated the Apollo 11 space shuttle 240,000 miles to make the historic 76-hour journey to become the first men to touch down on the Moon.

Armstrong and Aldrin would become the first of 12 Americans to set foot on the lunar planet, while over a half a billion people watched in fascination, forever changing the way we view our solar system. 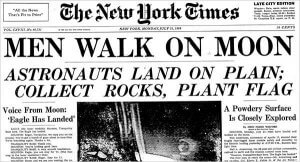 The goal of reaching the Moon was spurred on by the Soviet Union's 1957 launch of the first satellite, Sputnik, into space, and President John F. Kennedy's goal of landing a man on the Moon and returning him safely before the end of the decade. The event marked a victory for the United States in the technological race to space.

The United States and Russia late joined forces, along with Japan, Europe and Canada, to study space through the International Space Station (ISS), launched in 1998 through intergovernmental treaties and agreements. On the ISS, crews conduct experiments in biology, human biology, physics, astronomy, meteorology and other fields.

NASA Today
The last man to walk on the Moon, geologist and future US Senator Harrison Schmitt, was in 1972. The science of exploring space, however, has continued through the ISS and other missions, with uncrewed probes that have visited every planet in the solar system. 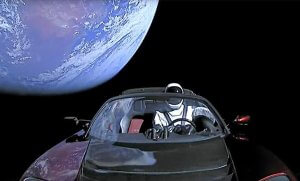 Elon Musk's Starman and Tesla were launched into space in 2018

Today, the National Aeronautics and Space Administration (NASA) is once again preparing for human missions to the Moon. "Launching from a revitalized NASA Kennedy Space Center in Florida, the agency's powerful Space Launch System rocket will carry astronauts aboard NASA's Orion spacecraft to the Moon, where astronauts will build and begin testing the systems needed for challenging missions to other destinations, including Mars, and deeper into space."

Project Artemis, NASA's plan to return humans to the Moon by 2024, with a sustainable presence, is expected to cost up to $30 billion. In the interim, private spaceflight companies have begun, in partnership with NASA, to develop and fund their own efforts to launch a commercial marketplace in low-Earth orbit.

Your Ticket to Space
SpaceX, launched by engineer and entrepreneur Elon Musk, Blue Origin, led by Amazon founder Jeff Bezos, and Virgin Galactic, founded by Richard Branson, are among the chief companies competing for the future of space tourism.

SpaceX drew worldwide fame In December of 2010 when, with its Falcon 9 rocket, it become the first private company to return a spacecraft to low-Earth orbit, and in May of 2012, became the first to deliver cargo to and from the International Space Station. In February of 2018, Space-X hit another milestone, sending the Falcon Heavy rocket, a turbocharged version of the Falcon 9, into space. On board was Musk's own Tesla Roadster sports car with a dummy called "Starman," rocking to David Bowie's "Space Oddity," which was launched into an Earth-Mars elliptical orbit around the sun -- for more than a billion years. 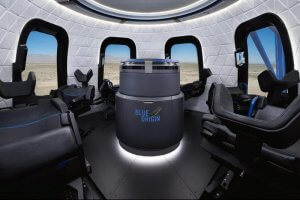 The look of Space Tourism. The first flight could be within the next year (pic: Gadget)

All of these companies are vying to be the first company to ferry clients on a once-in-a-lifetime trek to the edge of space and back.

Virgin Galactic claims to already have $80 million in deposits from more than 600 aspiring space travelers in 60 countries. The price tag for a seat on the suborbital flight is $250,000.

These innovations, and Saturday's anniversary of the first Moon landing, are a gleeful reminder of the possible, of things larger than our petty earthly political battles, and of what it is like to be inspired again!