While Americans settle in to post-election mode, there are still attempts in some corners of the country to roll back the results of the 2018 midterms.

In Wisconsin, where the state House and Senate are controlled by the GOP, lawmakers have voted to weaken the power of incoming Democratic Governor-elect Tony Evers with a series of measures stripping his authority. 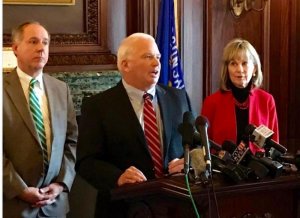 In one of the greater moral victories for Democrats and working people, Wisconsin Democrats captured every statewide office in the midterms, crowned by Evers' defeat of long-time labor foe and Republican Governor Scott Walker.

In retribution, Republican lawmakers are attempting to use the lame duck session -- the last opportunity for outgoing lawmakers to pass legislation before the newly elected legislature convenes next year - to regain power and thwart the will of the voters.

In an attempt to ram through the legislation, GOP Senate Majority Leader Scott Fitzgerald and Assembly Speaker Robin Vos waited until last Friday at 4:23pm to publicize the proposals before pushing them through in a late Tuesday night vote.

Included in the package were bills preventing the state from dropping out of a lawsuit challenging the Affordable Care act; moving the date of the 2020 presidential primary to boost the electoral prospects of a Republican state Supreme Court justice; limiting early voting to two weeks; reducing the powers of incoming Democratic Attorney General Josh Kaul; and limiting Evers' authority to implement state laws and make appointments to state agencies. 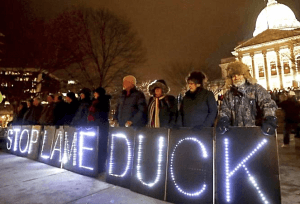 Using a similar playbook, Michigan Republican lawmakers introduced legislation two weeks ago that neutralizes the authority of the Governor, Attorney General and Secretary of State.

The bills include giving the State House and Senate, both controlled by the GOP, the ability to intervene in any state legal proceedings, normally under the offices of the state attorney general or the governor's office. Others include scaling back sick-leave requirements, a delay in an approved minimum wage increase, and formation of a six-person commission to oversee campaign finance law. 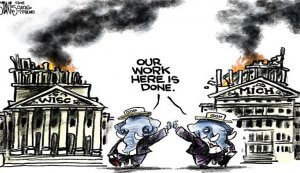 As in Wisconsin, the "sore losers" bills are expected to be signed into law by the outgoing Republican Governor.

Among those measures was a bill which ensured control of the Board of Elections to Republicans in election years, one that is still haunting Democrats now as the debate rages over the outcome of the fraud-ridden North Carolina Ninth Congressional District race.

Wisconsin and Michigan are important presidential battleground states, and like North Carolina, ones where the 2021 redistrictng process will be controlled by the legislatures. The congressional elections may be behind us for now, but the battle is still very much alive in the states.

August 9, 2017 In following on yesterday’s Voting Rights Act Daily, we took a look at how Diversity in the US Congress has changed since the landmark legislation was signed into law in 1965...