In a rare public address, the United Kingdom's Queen Elizabeth spoke to an anxious nation, saying, "Together we are tackling this disease. If we remain united and resolute, then we will overcome it...We will succeed and that success will belong to each and every one of us". 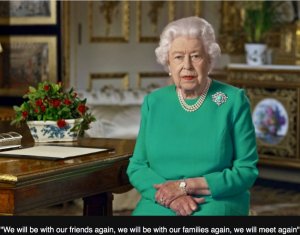 Queen Elizabeth II, 93, who ascended the throne in 1952, is the longest reigning British monarch, with four children, eight grandchildren and eight great-grandchildren.

The Queen's own son, Prince Charles, tested positive for COVID-19 on March 25th, but is out of isolation after experiencing mild symptoms.

Britain's Prime Minister Boris Johnson, who tested positive March 27th, was hospitalized yesterday as a "precautionary step" just hours after the Queen's address, according to his official office at 10 Downing Street. This afternoon Johnson was moved into intensive care as his condition worsened. His fiance, who is six months pregnant, is also infected. 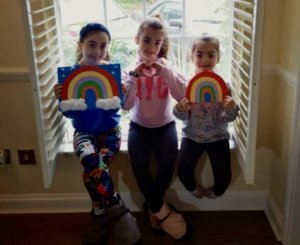 The Queen: The Rainbow images being draw by UK children "will be remembered as an expression of our national spirit"

In the dignified message, the Queen thanked the doctors, nurses and first responders who are a part of the National Health Service (NHS) front line, "as well as care workers and those carrying out essential roles, who selflessly continue their day-to-day duties outside the home in support of us all."

She also graciously thanked "those of you who are staying at home, thereby helping to protect the vulnerable and sparing many families the pain already felt by those who have lost loved ones."

By British standards, the reserved, almost grandmotherly words from the much-beloved monarch, was an inspirational "rallying call" to a nation.

An estimated 24 millions viewers watched the Queen's broadcast by television.

Aside from her annual Christmas Day message, the Queen has only addressed Britons in this way five times in her 68-year reign. 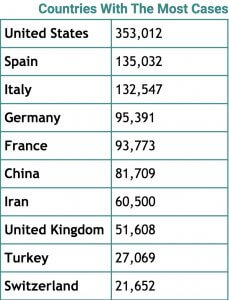 They include the beginning of the land war in Iraq in 1991, a live broadcast on the eve of the funeral of Diana, Princess of Wales, in 1997, a special address to the nation on the eve of her mother's funeral in April 2002, and a televised speech to celebrate her Diamond Jubilee in 2012.

Lessons in Leadership
The calm and reassuring message from the Queen, as head of state, is a stark contrast to that of American President Donald Trump. There was no credit taken or berated blame, no misinformation or maligning of public officials or institutions.

One could not image the Queen or a member of her cabinet slamming down the phone in a "apoplectic" rage, as Trump did with Boris Johnson last month, accusing the Prime Minister of "betrayal" after the UK signed a deal with a Chinese telecom company.

While the alliance with the United State's closest ally grows more distant, we hope the citizens of both nations can find solace in the Queen's message -- for Americans, we must look to inspiration where we can find it.

September 22, 2021 Last week the Census Bureau released the final refined data on the redistricting numbers, representing a shift in the congressional district count in 13 states going into the...

November 1, 2022 Now just one week out from the November 8, 2022 midterm elections, the battleground state of Wisconsin is at the center of the fight for control of the US Senate. Senator Ron...

DemDaily: When They Go Low, We Go High

HRC hit it out of the park last night in her debate with Republican nominee Donald Trump, and the polls seem to agree.