In a joint press conference with Russian President Vladimir Putin, US President Donald Trump shocked the world by condemning his own Justice Department's indictments against 12 Russian officials for their "large scale" cyber attacks against Democrats' emails and other networks in an attempt to undermine the 2016 election. 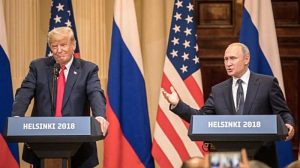 During a joint press conference with Putin a reporter asked Trump if he would denounce what happened in 2016 and warn the Russians never to do it again.  In response, Trump lapsed into criticism of the US FBI and its actions regarding Hillary Clinton's emails, then went onto praise the Russian President, a former KGB agent.

"I have great confidence in my intelligence people, but I will tell you that President Putin was extremely strong and powerful in his denial today."

Reaction from US lawmakers of both parties, and some within his own administration, was swift. 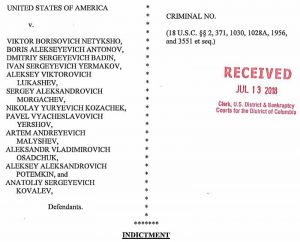 Republican Senator Bob Corker, Chair of the Senate Foreign Relations Committee, said, "I did not think this was a good moment for our country."

The "Conspirators," official members of the Russian Federation's Main Intelligence Directorate of the General Staff (know as "GRU"), "engaged in cyber operations that involved the staged releases of documents stolen through computer intrusions.  These units conducted large-scale operations to interfere with the 2016 U.S. presidential elections."

Former CIA Director John Brennan said, "Donald Trump's press conference performance in Helskinki rises to & exceeds the threshold of "high crimes and misdemeanors." It was nothing short of treasonous."

The Russian indictments, which are a part of Special Counsel Robert Mueller's investigation of Russian interference in the 2016 election, came following last week's meeting of world leaders at the North Atlantic Treaty Organization (NATO) in Brussels, and as Trump was meeting with British Primary Minister Theresa May on Friday.

There was some speculation, under the circumstances, that President Trump might cancel today's subsequent meeting with Putin.  Trump, instead, embraced the occasion to criticize the US intelligence community.

"The probe is a disaster for our country. I think it's kept us apart.  It's kept us separated. There was no collusion at all. Everybody knows it."

In February of 2018, in testimony before the Senate Intelligence Committee, the heads of the top six American intelligence agencies unanimously reaffirmed Russian interference.

May 20, 2019 In the tradition of Washington “powerhouse” luncheons, 225 of the country’s most prominent Latino leaders gathered in DC last week to honor their shining stars and...