At 2:00pm yesterday, Russian President Vladimir Putin spoke to the world in a lengthy and distorted diatribe about the history of Russia and Ukraine, laying out a case for his anticipated invasion of the former Soviet republic just hours before he executed the order.

Putin followed his 45-minute speech by signing a presidential decree recognizing the "independence" of the separatist "breakaway" territories of Donetsk and Luhansk in Eastern Ukraine's Donbas region. Hours later Putin ordered Russian forces into the region for "peacekeeping" purposes.

The move, which launches the most significant land war in Europe since World War II, paves the way for what many fear may be a larger military operation targeting all of Ukraine, and other former republics of the Union of Soviet Socialist Republics (USSR). 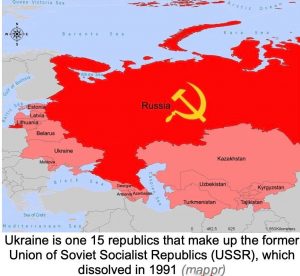 Russia and Ukraine
Following the dissolution of the USSR in 1991, the newly independent Ukraine declared itself a neutral state, forming a limited military partnership with Russia while also establishing economic and social reform partnerships with the European Union and North Atlantic Treaty Organization (NATO) in 1994.

Ukraine's geographic and political significance increased with the 2004 to 2007 expansion of the EU to include Cyprus, Malta and eight central and eastern European countries - expanding the wall of western-allied countries around Russia.

In the wake of Ukraine's February 2014 bloody anti-government Maidan Revolution and the ouster of pro-Russian Ukrainian President Viktor Yanukovych, Russia descended on Ukraine's Crimean Peninsula, with Putin announcing as annexed to Russia in March of 2014.

With some 40,000 Russian troops on Ukraine's eastern border, pro-Russian separatists in the Donetsk and Luhansk territories of the Donbas region broke off from Ukraine and declared independence. The region, which borders Russia to the east, is economically important for its mining, steel production and large coal reserves. It has been the site of a running conflict between Ukrainian forces and Moscow-backed rebels since the breakup of the Soviet Union. 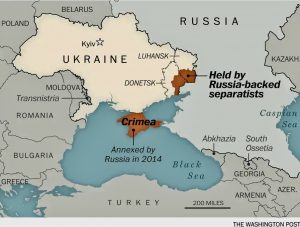 A 2014-2015 series of cease-fire agreements known as the Minsk Accords, signed by Russia, Ukraine, France and Germany have been ultimately unsuccessful in ending the ongoing fighting in the Donbas region.

From 2014 through today, the annexation of Crimea and the Donbas conflict, known as the Russo-Ukrainian War, has killed more than 14,000 people, wounded tens of thousands and displaced more than a million.

In April of 2021, Putin sent about 100,000 Russian troops to Ukraine's borders, ostensibly for military exercises, but continued the military buildup, culminating in the international security crisis we are facing today.

The sanctions by the United States and its NATO allies announced today include, among others: 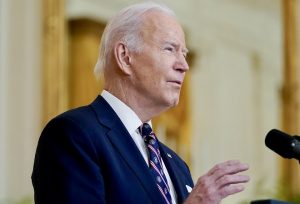 * Germany has halted the process of certifying the Nord Stream 2 pipeline, the $11 billion, 750-mile long undersea pipeline between Russia and Germany that is awaiting certification from German regulators.

* The United Kingdom is imposing sanctions against five Russian banks (Rossiya, IS Bank, General Bank, Promsvyazbank, and the Black Sea Bank) and three billionaire oligarchs (Gennady Timchenko, Boris Rotenber, and Igor Rotenberg), freezing their assets and barring them from traveling to the UK.

* The US is imposing sanctions on two significant Russian financial institutions, freezing their US assets and shutting them out of the global financial system.

* The US is imposing sanctions on five Russian elites and their family members.

* The US Secretary of the Treasury will further determine if any institution in the financial services sector of the Russian Federation economy is a target for further sanctions.

January 21, 2018 For our readers — In the event you missed them, three past Dailys of relevance to current political happenings. When a Government Shuts Down * DACA and the Dreamers...