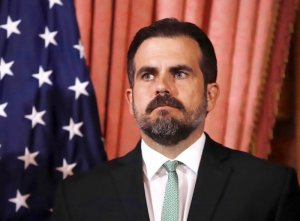 The crisis in Puerto Rico reached full fervor today, with thousands protesting to call for the resignation of Governor Ricardo "Ricky" Rosselló following the release of hundreds of pages of misogynistic and homophobic messages between him and his advisors.

The leader of the New Progressive Party, known as the Partido Nuevo Progresista or PNP in Spanish, Rosselló was elected in 2016 as the 12th governor of Puerto Rico.

Rosselló, 40, is a former medical research scientist who grew up in politics as the son of former Governor of Puerto Rico and pediatric surgeon, Pedro Rosselló. He founded the political advocacy group Boricua ¡Ahora Es! to advocate for Puerto Rican statehood.

The once-popular centrist entered office when the Puerto Rican government was facing a $70 billion debt crisis, a poverty rate of 45% and 14.2% unemployment. Once considered a rising star, he initially rolled out several innovative policy initiatives and was named the president of the Council of State Governments.

Rosselló also garnered national attention following the aftermath of Hurricane Maria in September, 2017, which devastated the territory of 3.4 million people. The disaster caused an estimated 4,000 deaths and the largest power outage in American history, with total damages in excess of $95 billion.

His administration, however, has since been haunted by allegations of corruption, culminating in the firing or resignations of several high-profile members in June. 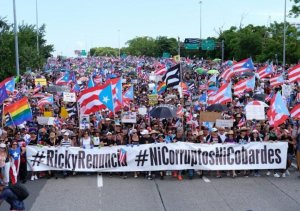 Earlier this month the FBI arrested Puerto Rico's former Secretary of the Department of Education (DOE), Julia Keleher, and former Health Insurance Administration (ASES) Director Ángela Ávila Marrero. Both, along with other parties, were indicted for a combined 32 counts of conspiracy, wire fraud, money laundering, and theft of government funds.

Telegramgate
On July 8, 2019, screenshots of a group chat on the Telegram instant messaging service, was leaked.

On July 13th, the entire 889-page chat between the governor and 11 all-male high-ranking government officials and allies, was made public by local news agency Centro de Periodismo Investigativo.

The chat included vulgar language, a discussion of the operation of internet troll networks on social media, sexist and homophobic slurs, and insults about victims of Hurricane Maria.

In another exchange, the then-chief financial officer of Puerto Rico, Christian Sobrino, referred to the teachers union as "terrorists," saying he was "salivating" at the idea of shooting a person or people -- an apparent reference to either union president Aida Díaz or to San Juan Mayor Carmen Yulín. Rosselló responded that "You'd be doing me a grand favour." Sobrino has since resigned. 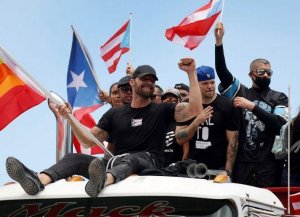 Although Rosselló has fired the individuals involved in the chats, the Puerto Rico Mayors Federation has given a vote of no confidence to his government, and the president of Puerto Rico's House of Representatives has formed a commission to assess whether the governor committed any impeachable offenses.

Puerto Rico's nonvoting member of Congress, Representative Jenniffer González-Colón, has called for Rosselló's resignation and Puerto Rico's Department of Justice and the Office of Government Ethics have launched investigations.

On Sunday, July 21st, Roselló announced in a Facebook video that he will not seek reelection in 2020 and resigned as president of the PNP, but not as governor.

Today, in what is estimated to be the largest protest in the US territory's history, hundreds of thousands of people hit the streets across the island, shutting down highways and demanding the resignation of the island's embattled governor.

In response to the events today, President Trump focused primarily on himself, saying he was "the best thing that ever happened to Puerto Rico and cited the alleged popularity of his 2002 Miss Universe pageant held in San Juan. The majority of his comments were not on the misogynistic actions of Rosselló, which Trump called "not good," but on the female Mayor of San Juan, who Trump called "a horror show," and with whom he had contentious twitter exchanges following Hurricane Maria.

September 5, 2019 Last Friday the Democratic National Committee announced it is scrapping plans to offer a virtual voting option for the party’s 2020 Iowa and Nevada presidential...