While millions of people in Puerto Rico await relief following the destruction of the US territory by Hurricane Maria, political opponents of the Jones Act are using the disaster to push for elimination of the law.

The federal statute, unknown to most US citizens, was signed into law by President Woodrow Wilson two years after World War I ended -- as a protective measure against foreign competition, and to ensure a vibrant United States maritime industry and force for national defense.

Former Presidents George W. Bush and Barack Obama both touted it as crucial to national security, ensuring a quality, safe US shipping industry, and to reducing dependency on foreign-owned vessels. President Trump, until now, has concurred.

In the immediate aftermath of the September 20th storm, the Jones Act was decried as the cause for the delay in getting much-needed medicine, food and fuel to the island's devastated inhabitants -- preventing foreign vessels or non US-flag carrying ships from entering the port.

Senator John McCain, a long-time critic, introduced legislation to permanently exempt Puerto Rico from the law and, at the request of Puerto Rico's Governor Rossello, President Trump issued a 10-day waiver of the Jones Act. 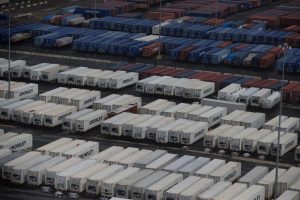 The Facts
In reality, however, the purely political action does nothing to resolve the real issue at hand - the lack of infrastructure and resources to distribute the aid to those in need.

As confirmed by Department of Homeland Security, which administers the Federal Emergency Management Agency (FEMA), moving the goods around the island is the biggest challenge due to washed out roads, failed bridges, a lack of electricity, and the inability to communicate with truck drivers and other workers.

An estimated 10,000 shipping containers with critical relief supplies have been sitting in the port of San Juan and Puerto Rico for days and the three largest American ship operators in Puerto Rico are at capacity at their terminals.

Cargo from around the world can, in fact, be imported and almost two-thirds of the vessels that regularly call on Puerto Rico are foreign-flag ships.

The Jones Act only limits foreign vessels to servicing one American port at a time, requiring them to leave for a foreign port before returning. Stops in multiple consecutive ports must be handled by American ships and crews as a matter of homeland security, to ensure a robust shipbuilding industry and a vetted, well-trained merchant marine to support our military.

Every major maritime nation in the world protects some part of its domestic shipping with laws similar to the Jones Act.

In a release Thursday, the Maritime Labor Alliance stated they do not oppose Jones Act waivers in emergencies where there are not enough U.S. flag ships available, however:

*  Other U.S. flag commercial vessels are available and there are over sixty government owned reserve cargo vessels that can be called into action and fully operational with 72 hours.

The Jones Act supports a total of over 500,000 maritime industry and related industry jobs in the United States, and represents over $100 billion in economic output.  It represents American jobs, American quality and American security.  We need the Jones Act.