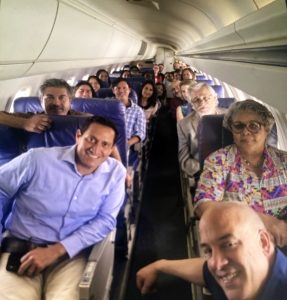 Texas Democrats staged their second walkout in less than four months, fleeing the Lone Star state to prevent Republicans in the state legislature from passing a new restrictive voting bill.

This time, however, they boarded a chartered plane to Washington to further dramatize their plight to a national audience in hopes of applying pressure on Congress to pass legislation at the federal level.

By leaving the state, 58 State House members prevented Texas Republicans from reaching the two-thirds quorum needed in order to conduct business and to pass legislation.

Texas has a Republican state government trifecta, which exists when one political party simultaneously holds the governor's office and majorities in both state legislative chambers. The GOP controls the State House 83-67 and the State Senate 18-13.

Now out of the state's jurisdiction, the legislators plan to stay in Washington for three weeks through the term of the special legislative session, called by Abbott in order to resurrect the anti-voter legislation, and which can last a maximum of 30 days under the state's constitution. The two-term Governor, however, has vowed to call "special session after special session all the way up until election next year" to force a vote. 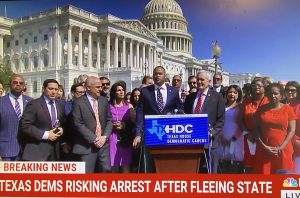 Texas Dems: "We need to do this for the Black and Hispanic voters...that are about to be discriminated against in a way we haven't seen since the 1960's"

The Texas battle has become symbolic of Republican's nationwide effort to pass extreme voter restriction laws which disproportionately disenfranchise citizens of color and underprivileged communities from exercising their right to vote.

In the state's Spring session, Texas Democrats infamously defeated legislation passed May 30th in a "dark-of-night" vote by the State Senate by staging a dramatic walkout, leaving the chamber short of the quorum needed to vote before the midnight deadline for close of the legislative session.

While in Washington, the Texas House Democrats will advocate for national voting rights legislation before Congress leaves for recess in August.

That includes the For the People Act, passed by the US House of Representatives on March 3, 2021, which would expand voting rights and mitigate some, but not all, of the voter suppression provisions passed in the states. 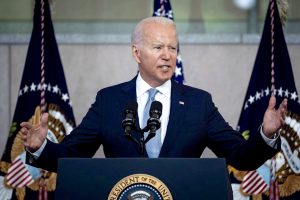 Biden, quoting John Lewis, "Freedom is not a state, it is an act" (Drew Angerer)

The Act, H.R.1, would force states to offer at least 15 days of early voting, universal access to mail-in voting, same-day registration for federal races, and stop states from purging people from voting rolls, among other measures.

The Senate companion bill, S.1, was introduced March 17th. On June 22nd, the Senate rejected debate on the bill by a vote of 50-50 along party lines, shy of the 60 votes needed to proceed.

Senate Majority Leader Chuck Schumer (D-NY) has promised to bring S.1 to the floor again, but without the support of all 50 Democrats and ten Republicans to break a filibuster, it will be defeated in the upper chamber.

Democrats are also expected to reintroduce the John Lewis Voting Rights Act, which would restore and strengthen parts of the  Voting Rights Act of 1965, including portions struck down by the US Supreme Court's 2013 decision in Shelby County v. Holder.

The pressure on Biden and Democrats to escalate voter protection efforts increased considerably after last month's Supreme Court's decision that further weakened portions of the Voting Rights Act, limiting the ability of minorities to challenge state laws previously deemed discriminatory under the VRA. 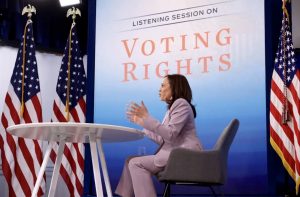 This afternoon, speaking from Philadelphia, President Biden called for passage of both the For The People and John Lewis Voting Rights Acts, saying it is now up to Congress to "repair the damage done.. and restore the Voting Rights Act to its intended strength."

Describing it as "election subversion," Biden said "The concerted effort to undermine our elections and the sacred right to vote... the most dangerous threat to voting and the integrity of free and fair elections in our history."

In the interim, Biden said, his Department of Justice will "be using its authority to challenge the onslaught of state laws undermining voting rights."