The House passed important legislation this week to protect the retirement security for some 1.5 million American workers.

The Rehabilitation for Multiemployer Pensions Act, H.R. 397, was introduced by House Ways and Means Committee Chairman Richard Neal (D-MA), and passed 264-169, including the support of 29 Republicans.

The Multiemployer Pension Crisis
Multiemployer defined benefit (DB) pension plans are pensions sponsored by more than one employer and maintained as part of a collective bargaining agreement.

Those pensions are protected under the Pension Benefit Guaranty Corporation (PBGC), a federally chartered corporation created by the Employee Retirement Income Security Act of 1974 (ERISA), which set minimum standards for most voluntarily established retirement and health plans in private industry. 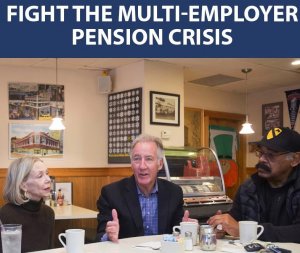 When pension plans fail, the PBGC pays at least a portion of the pension benefits promised to retirees, up to legal limits set by Congress. Last year, the PBGC paid $153 million in financial assistance to 81 insolvent multiemployer plans.

PBGC estimates that over 100 of the multiemployer pension plans, covering more than 1 million participants, are in "critical and declining status" and, without intervention, the Multiemployer Program is likely to run out of money by the end of 2025.

According to the Brookings Retirement Security Project, this is due in part to the decisions of Finance actuaries who weren't cautious enough in planning what they could deliver for retirees, and the fact that many companies have gone out of business, leaving the pension plans to cover the benefits of retirees whose employers are no longer contributing.

"Several of these plans are large enough to take down the entire PBGC, threatening the security of another 10 million hard-working Americans." said Congresswoman Marcy Kaptur (D-OH) during the floor debate.

Be It Resolved
The Butch Lewis Act would establish a Pension Rehabilitation Administration under the Department of Treasury, and a trust fund that would offer low-interest, federally subsidized loans that pension plans could pay back over the course of 30 years. Plans would only be eligible to receive the loans if they were in critical, declining status or insolvent. 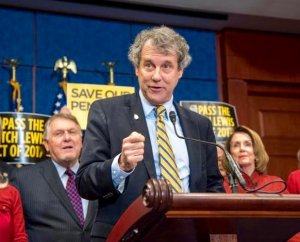 It would maintain the financial health of multiemployer plans and adequately fund the PBGC, without making any cuts to the earned benefits of current or future retirees. Plans would invest the money from these loans and use the investment earnings to pay retiree benefits.

By putting the plans back on solid footing, the bill would also protect small businesses from the threat of closing their doors if plans are allowed to fail.

"If we do not act, the pensions of many workers and retirees will be cut to the bone, and the futures of their families and communities will be thrown into jeopardy," added Pelosi.

A companion bill, S.2254, has been introduced in the US Senate by Senator Sherrod Brown (D-OH) and is expected to come up for debate following the summer recess.

Although the Act already had 27 co-sponsors, it is facing a tough battle in the Republican-controlled US Senate, where many GOP lawmakers are already assailing it as a "bailout" for private sector multiemployer pension plans.

February 28, 2018 There are four special elections on the calendar in 2018 and the contest to replace Republican Tim Murphy in Pennsylvania’s 18th Congressional District is heating up...