Pennsylvania's new court-mandated congressional map was released this week, providing new promise for Democrats in one of the country's key battleground states.

The new map follows a January 22, 2018 ruling by the Pennsylvania Supreme Court that threw out the existing map used for the last three election cycles.  That map was originally drawn by the state's Republican-majority legislature after the 2010 census.

State Republicans requested that the Supreme Court of the United States (SCOTUS) stay the state supreme court's ruling pending an appeal, but it was denied.

The pending litigation also all but froze congressional campaigning while incumbents and challengers waited to see where the new district lines would fall.

It now leaves candidates little time before the March 20th filing deadline and May 15th party primaries to develop and implement their campaign plans under the new borders and targeted voters. 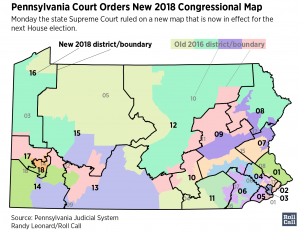 The "Keystone State" is traditionally one of the top "battleground" or swing states in a presidential election with a critical 20 electoral votes.  In 2016 Trump won the Keystone state 48.2% to Hillary Clinton's 47.5%, and was a turning point in the election.

New Lines
Under the old lines Donald Trump beat Hillary Clinton in twelve out of the eighteen seats. Under the new lines, as recalculated based on precinct performance, Trump would have won ten seats compared to HRC's eight.

This bolsters chances for Democrats, and their chances of taking back the US House in 2018.