On March 9th, the US House of Representatives, by a vote of 225-206, passed H.R. 842 -- the most significant revision of labor law since the passing of the original National Labor Relations Act (NRLA) of 1935.

The fate of the bill, however, which is now in the Senate Health, Education, Labor, and Pensions (HELP) Committee, lies with a 50-50 US Senate hampered by the filibuster.

The PRO Act, however, is crucial not just to labor, but to the stimulus and future of a more inclusive and sustainable economy. 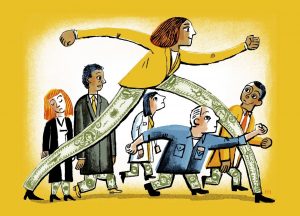 Studies show that the world's best performing economies have high union density and a high level of cooperation between labor and business.

"There's been considerable discussion about the moral case for higher wages, but there is a strong business case as well, since high wages have the potential to increase productivity and ultimately profits. In the transition to the new economic normal after the pandemic, doing what's right may also be what's best for the bottom line." said economist Ray Fisman and Harvard business professor Michael Luca in a Wall Street Journal op-ed earlier this year.

"Lifting up workers is good for business. It is a pathway to creating economic equity in local communities throughout America, in every zip code, contributing to a national GNP that is still 70 percent consumer-based. Working people are the engines of our economy, and our customers. When workers have more money in their pockets, they spend it in our economy," said David Levine, President and co-founder of the American Sustainable Business Council.

"When employers and employees work together, there is a clear business advantage resulting in greater retention, lower training costs and a more experienced workforce," said Levine, pointing to statistics that show when labor and management work together, productivity increases by 16% in hospitals, between 19% and 24% in manufacturing, and between 17% and 38% in the construction sector. 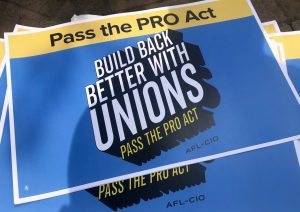 "The PRO Act gives responsible employers an opportunity to level the playing field with competitors who exploit, diminish and deprive their employees of basic rights in the workplace, said Lori Pelletier, Executive Director of American Income Life's Labor Advisory Board. "The need, and rewards, for 'high road employers' have been laid bare by the pandemic."

ASBC and American Income Life are leading a national effort to get businesses of all sizes to add their names in support of the PRO Act. "It is critical that lawmakers understand that many of their home-state businesses support this legislation and its importance to reviving America's stagnating middle class."

* Large majorities favored the PRO Act in every state surveyed by a margin of at least 30 points. 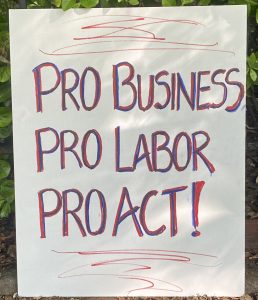 * The PRO Act drew remarkably broad support across partisan and ideological lines and from rural, suburban, and urban communities. Democrats overwhelmingly supported the PRO Act by 87% to 6%, and independents agreed by a remarkable 34-point margin (60% to 26%), as did moderates by 67% to 20%. More surprisingly, perhaps, support also exceeded opposition among Republicans (45% to 40%) and Trump voters (45% to 41%).

* Key provisions of the PRO Act were very popular with voters. Even bill elements that opponents have attacked proved to be broadly popular with the voting public, and none were opposed by a majority of voters in even a single state.

In August of 2019, 181 CEOs of America's largest corporations overturned a 22-year-old policy statement that defined a corporation's principal purpose as maximizing shareholder return. In its place, the Business Roundtable endorsed "stakeholder capitalism," writing that their companies exist to "benefit all stakeholders - customers, employees, suppliers, communities and shareholders."

"As America works to recover from the devastating challenges of a deadly pandemic, an economic crisis and reckoning on race that reveals deep disparities, we need to summon a new wave of worker power to create an economy that works for everyone." -- President Joe Biden on House passage of the PRO Act

Related
DemDaily: Protecting The Right to Organize. The PRO Act Explained 3/17/21
Write Your US Senators: Tell them to pass the PRO Act
Add your business: support the PRO Act
DemList will keep you informed.