CALIFORNIA
California uses a nonpartisan blanket primary system, also known as a "jungle primary," where all candidates, regardless of party affiliation, run against each other. The top two vote-getters advance to the general election.

While the top two contenders have been called in most races after Tuesday's primaries, some are still hanging in the balance as, under California's universal mail-in voting system, ballots postmarked on election day will be accepted for seven days after the election.

In the statewide elections, approximately 56% of the vote has been reported. In some Congressional, municipal and down-ballot contests, however, the reported vote ranges from 35% to 70%.

Initial results indicate that Democrats are on track to maintain their dominance over all statewide offices.

US SENATE: In the US Senate contest, voters cast their ballots in two elections for the same seat. 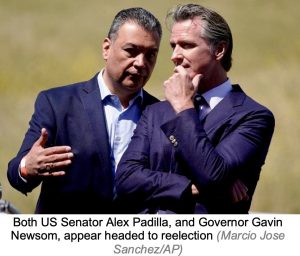 1) The first is for a special primary election to fill the remaining term of former Senator Kamala Harris, who vacated the seat to become Vice President. The winner of the special general election on November 8 will serve through the remainder of the 117th Congress, which ends January 3, 2023.

Former California Secretary of State Alex Padilla (D), who was appointed by Governor Gavin Newsom (D) as interim US Senator on December 22, 2020, has been representing the Golden State in the seat.

2) The second, regularly scheduled Senate primary was to select the top two candidates to run in the November 8 general election for a new, full six-year term, beginning with the 118th United States Congress on January 3, 2023.

In the special primary, Padilla (54.2%) and Republican constitutional attorney Mark Meuser (21.7%) advance to the general election. They both advance as the top two from the regular Senate primary as well, with Padilla having secured 53.4% to Mueser's 14.4%. 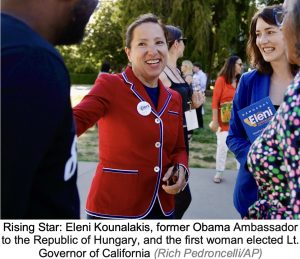 GOVERNOR Gavin Newsom (56.2%) and Republican State Senator Brian Dahl (17%), as the clear top-two primary vote-getters, will face each other in November.

In the one hope for the GOP, Republican Lanhee Chen has secured the top slot in the race for Comptroller with 37.1%. Democrats Malia Cohen (21.2%) and Yvonne Yiu (15.9%) are vying for second. 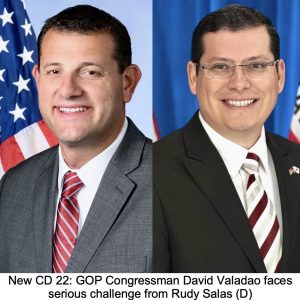 CD 37: In the seat being vacated by Congresswoman Karen Bass to run for Mayor of Los Angeles, Democrats Sydney Kamlager (43.7%) and Jan Perry (18.4%) appear headed to the general election runoff. 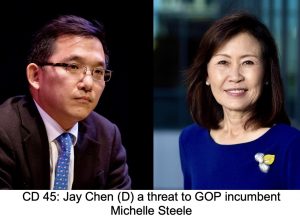 CD 47: The results were a boost for incumbent Katie Porter (51.2%) who will face Republican challenger Scott Baugh (30.9%) in the general.

In the Special General Election for California's 22nd Congressional District to fill the remaining 117th Congress term of former GOP Congressman Devin Nunes, Republican Connie Conway (59.5%) defeated Lourin Hubbard (40.5%). Conway, however, will only serve for a few months in Congress as the seat was essentially dismantled by redistricting. 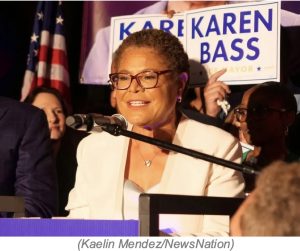 San Francisco District Attorney Chesa Boudin has lost his seat in a recall election, with 60% of voters casting ballots in favor of recall, to 40% against.