We are now two-thirds of the way through the Democratic presidential primary season, with twenty states remaining on an election calendar that has been historically upended by the coronavirus crisis.

Almost all remaining primaries are ones that have been rescheduled due to the near-nationwide shutdown under the pandemic, with most states moving to predominantly vote-by-mail.

President Trump has railed against vote-by-mail, which has historically favored Democrats, claiming it encourages "Voter Fraud," and has threatened to withhold funding to states that exercise the system.

In the pre-COVID era, only five states - Colorado, Hawaii, Oregon, Utah and Washington - conducted their elections by mail.

Though all states previously allowed voters to vote by mail in certain circumstances, 16 required voters to apply, with justification, for a ballot. Given the current crisis, many states have loosened their restrictions, but most still require voters to apply for a mail-in absentee ballot, rather than automatically sending one to every registered voter.

Oregon, which held its Democratic primary Tuesday, was the first state in the nation to go exclusively all-mail almost two decades ago, and boasts one of the highest electoral participation rates in the country.

While the presidential primary, which Joe Biden won with 68%, was at the top of the ticket, the Democratic primary for Secretary of State was the most-watched contest, where State Senator Shemia Fagan  clinched the nomination over State Senator Mark Hass by less than half a percentage point.

Next up is tomorrow's primary in Hawaii, with 24 delegates at stake. 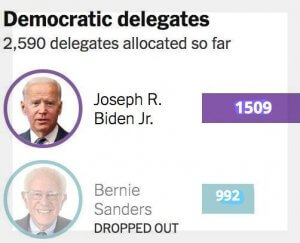 Although Sanders has endorsed Biden as the nominee, he is keeping his name on the ballot in remaining primary states in order to secure delegates and,"a stronger position at the Democratic convention to help us shape the new platform of the Democratic Party."

The following state primaries will be held between now and the Democratic Convention, scheduled for the week of August 17th. The Democratic National Committee (DNC) recently voted to amend its by-laws to allow for flexibility in planning a shortened or all-virtual convention. 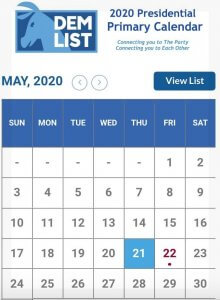 November 1, 2018 Midterm elections are traditionally considered a referendum on the party in the White House and this one, with history’s most controversial occupant, is no exception. As of...