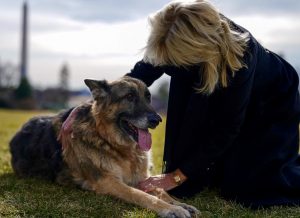 In the midst of a very serious and surreal time in our history, the new occupants of the White House bring a welcome reprieve.

President Joseph Biden's pets were introduced to their new home last weekend with much fanfare, bringing a special warmth, heart and humanity to the White House that was, not surprisingly, void during the Trump years.

Donald Trump, who has said "I don't have time" for a furry friend, was the first president in a century not to have a pet. 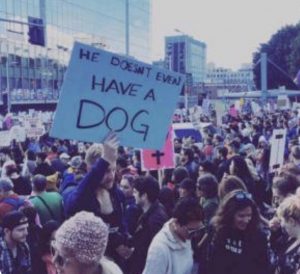 The Biden's German Shepherds, 12-year-old Champ and 2-year-old Major, are reportedly adapting well to the grounds and residence.

Major, who was adopted by the Bidens in 2018, is enjoying his new fame as the first rescue dog to live in the White House.

President Biden was raised with German Shepherds, regarded among the most intelligent and loyal canines, "from the time I was a kid. And I've actually trained them and shown them in the past, my past life." 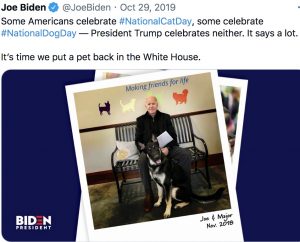 The "pet issue" made its way into a campaign message

Presidential pets have long been a source of public fascination, providing insight into the personal side of our country's leaders.

From the practical "pet" horses, cows, goats, chickens and even sheep that roamed White House lawn, to the more domestic animals today such as dogs, cats ad birds, animals occupying the Executive Mansion have served as a relatable reflection of American life.

Thomas Jefferson's (in office 1801-1809) favorite pet was "Dick," one of at least four mockingbirds he owned while in office. Andrew Jackson's (1829-1837) parrot, Polly, learned to swear and later, when attending Jackson's funeral, had to be removed due to loud and persistent profanity. 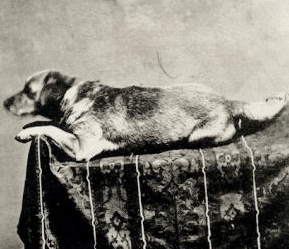 The gift of exotic animals to Presidents has also been pervasive throughout history. Martin Van Buren (1837-1841) owned two tiger cubs given to him by the Sultan of Muscat and Oman before Congress forced him to donate the tigers to the zoo.

The name "Fido" became a generic name for an everyday dog after Abraham Lincoln's (1861-1865) famous pup. Lincoln, who reportedly would talk to his cats Tabby and Dixie for hours, was said to have once said in frustration, "Dixie is smarter than my whole cabinet! And furthermore she doesn't talk back!" 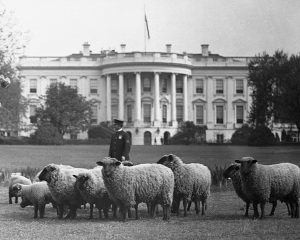 Benjamin Harrison (1889-1893) had a goat named "Old Whiskers," along with two possums named after the 1896 Republican party platform's twin measures of "Protection and Reciprocity." His also was said to have kept two alligators in the White House conservatory.

Theodore Roosevelt (1901- 1909) and his six children were among the most celebrated presidential animal lovers. Their zoo of pets ranged from a pony, sheep, dogs, cats, a macaw, guinea pigs and rabbits, to a badger, black bear and a one-legged rooster named "Fierce." Daughter Alice had a small black Pekingese named Manchu, which she received from the last empress of China during a trip to the Far East. 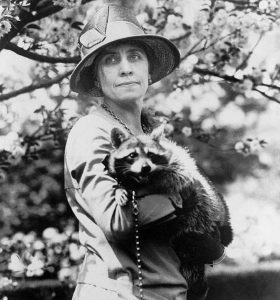 Woodrow Wilson (1913-1921) had, at one point, 48 sheep that kept the White House lawn trimmed "in the most economical way," and their wool was sold to benefit the Red Cross.

Calvin Coolidge (1922-1928) had nearly a dozen dogs, as well as cats, birds and a raccoon -- intended for a Thanksgiving feast, but rescued by First Lady Grace Coolidge. She also raised thirteen Pekin ducklings, received as an Easter gift, in a White House bathroom.

Other animals gifted to the Coolidges, most of which were eventually placed with zoos, were a kangaroo, antelope, hippopotamus, a black bear named Bruno, and twin lion cubs from Johannesburg, Africa named Tax Reduction and Budget Bureau. 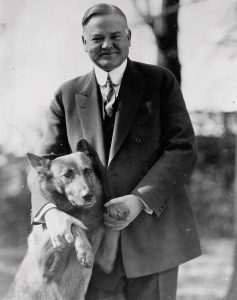 Herbert Hoover (1929-1933) was an avid dog lover who was the first to really use a pet for political purposes. With hopes of boosting his campaign image as warmer and more charismatic, Hoover sent out thousands of autographed photos of himself with his German Shepherd, King Tut. Hoover won the presidency, and King Tut moved into the First Residence.

Franklin D. Roosevelt's (1933-1945) famous "Fala Speech" is credited with helping him win reelecton in 1944. After Congressional Republicans manufactured a story that Roosevelt had wasted taxpayer money by sending a destroyer to retrieve his Scottish terrior, Fala, on an island during a trip to the Pacific, the 32nd President mocked them, saying, "I don't resent attacks, and my family doesn't resent attacks, but Fala does resent them." 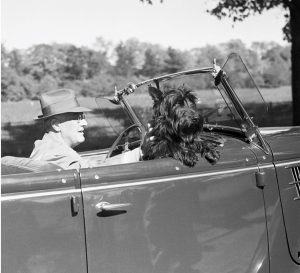 The bit, which was the brainchild of actor Orson Welles, was a hit with reporters and offered a stark contrast in humor to his opponent, Thomas Dewey.

John F. Kennedy (1961-1963) and his family also had a menagerie of pets, including Caroline's dog Pushinka, puppy of Soviet space dog Strelkawhich, and a gift of Soviet Union Premier Nikita Khrushchev. The puppy had to be put through a battery of tests first in search of hidden listening devices before being allowed at the White House. 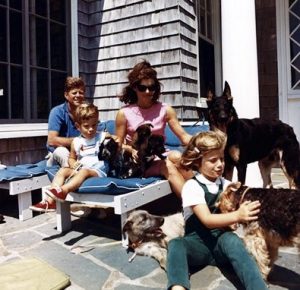 Richard Nixon (1969 -1974) famously used his dog to help defray a potential political crisis in what became known as his "Checkers Speech," six weeks before the 1952 United States presidential election, in which he was the Republican candidate for Vice President.

Nixon, who had been accused of improperly using campaign funds for personal expenses, countered cleverly that he intended to keep one political gift, regardless of the outcome, his Cocker Spaniel that his children had named Checkers. The public responded with millions of telegrams and calls in support of Nixon.

From Gerald Ford's (1974-1977) beautiful golden retriever "Liberty" and the multiple pups she gave birth to in the white house, to George H.W. Bush's (1989 to 1993) much-loved English Springer Spaniel, Millie, who "wrote" a children's best-seller, the public has responded positively to politicians with pets. 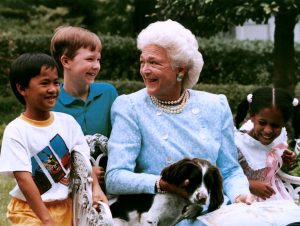 The advent of the internet, however, made instant social media celebrities of presidential pets in recent history.

Bill Clinton's (1993-2001) cat Socks, perhaps the most famous feline to live in the White House, was an adopted stray.  He later shared the spotlight with Buddy, a chocolate Labrador that joined the family in 1997, following a turbulent year for the President.

Although the two pets never got along, they shared credits in the hit children's book, "Dear Socks, Dear Buddy: Kids' Letters to the First Pets." 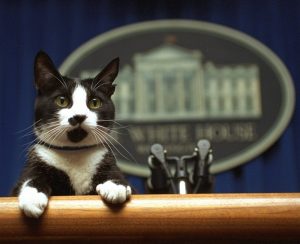 It was Barack Obama's (2009-2017) Portuguese water dog Bo, however, who would became the ultimate canine celebrity.

Bo, who was a gift to the Obamas from Senator Ted Kennedy, was named for R&B musician Bo Diddley, although the name also makes up the initials of Barack Obama (B.O.).

Bo was subequently the subject of several children's books, appeared in the comic book Pet Avengers, and was a guest on television shows Late Night with Seth Meyers and Ellen. He was joined in 2012 by the Obama's second Portuguese water dog, Sunny. 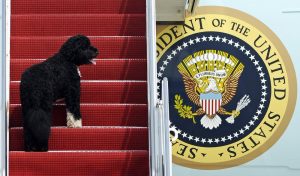 Now, after a four-year absence, the pitter-patter of paws can once again be heard in the White House.

Tonight’s “first in the nation” Iowa Caucuses kick off the Presidential nomination process.