While the presidential election appears publicly to be on hold, national polls continue to monitor the mood of the electorate amidst the daily escalation of the coronavirus pandemic and the roller coaster of related politics.

However, the poll, conducted March 22-25 among registered voters (margin of error: 3.5%), is a departure from other recent surveys that place the two rivals further apart in a hypothetical general election matchup.

Among the six surveys is a Fox News poll, conducted March 21-24 (MOE: +/-3%) that showed Biden leading Trump by nine points, and the President's disapproval rating at 51%.

The release of the poll results by the conservative media outlet, consistently a vehicle for promoting the President, brought ire from the temperamental tweeter. "Whoever their Pollster is, they suck," Trump posted. 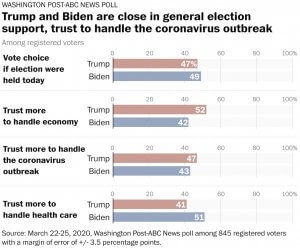 Democratic pollster Brad Bannon calls the enthusiasm gap "Troubling," adding, "Everything the President has done since his inauguration was designed to fire up the Republican base and the effort has paid off -- for now."

Bannon believes "Trump is riding an artificial sugar high because Americans rally behind the president in times of crisis. Support and enthusiasm for the President will wear thin if the Coronavirus crisis continues... and the casualties continue to mount."

While the pandemic has halted all in-person campaigning, Biden has struggled to remain relevant online while competing with Trump's daily press briefings alongside national health experts that are directing the response.

Pause on the Primary
Biden has not yet secured the Democratic presidential nomination, but commands an almost insurmountable lead in the delegate race with 1,217 to Bernie Sanders' 914 delegates. 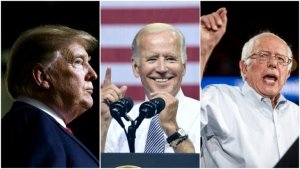 Sanders was expected to suspend his campaign after Biden's sweep in the March 17th primaries, pausing donations and advertising. The simultaneous surge of the pandemic in the US, however, appears to have altered not only the course of the country but of Sanders' campaign.

The Vermont Senator has vowed to stay in the race, utilizing an extensive social media network to promote his message on COVID-19 and his Medicare For All plan.

Democratic primaries or caucuses have already been held in 30 states, putting Biden over halfway to the nomination, but now fourteen states have postponed or extended their primaries due to the coronavirus pandemic.

While national polls continue to track the numbers, surveys of battleground states have all but ceased, with no current polling in Florida, Michigan, Pennsylvania, Wisconsin or other battleground states since the coronavirus pandemic has become a reality for most Americans in the last two weeks.

June 10, 2020 Voters in five states went to the polls yesterday, with the presidential at the top of the ticket in Georgia and West Virginia, and the regularly scheduled primaries for...