Commercials during the Super Bowl are a much-anticipated form of advertising entertainment, with corporations spending up to $6.5 million for a 30-second ad to reach an average 112 million fans.

It is also an opportunity for well-funded political candidates to maximize their audience reach during one of the biggest television events of the year, and 2022 was no exception. 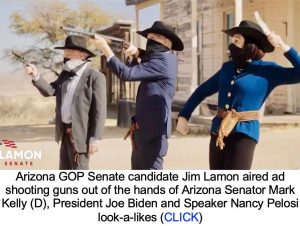 The ad shows Lamon clad in a sheriff’s badge and a cowboy hat, in an old western-style shootout with President Joe Biden, House Speaker Nancy Pelosi and Kelly look-a-likes. Lamon shoots the weapons out of their hands, saying, "The good people of Arizona have had enough of you. It's time for a showdown."

Lamon, a solar power business tycoon has pledged to spend $50 million of his own funds to secure the GOP nomination in the August 2, 2022 primary.

A January 21-24, 2022 poll of likely voters by Data For Progress showed state Attorney General Mark Brnovich led the GOP field with a 26% favorability rating, followed by Thiel Capital CEO Blake Masters (16%), Lamon (15%) and retired Major General Michael McGuire (8%). In a general election voting matchup, incumbent Mark Kelly garnered 49% to Brnovich's 47%. The unknown is whether incumbent Republican Governor Doug Ducey, who garnered 47% to Kelly's 50% in a matchup, will throw his hat in the ring. Margin of Error +/- 3%. 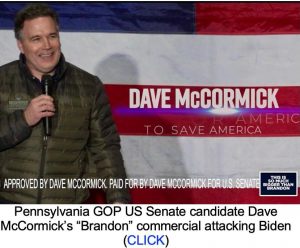 Pennsylvania US Senate candidate Dave McCormick, who is vying for the Republican nomination to fill the open seat vacated by retiring Senator Pat Toomey (R), spent $70,000 on his “Let’s Go Brandon” ad.

The ad attacks the Republican-touted failures of Biden's administration. including inflation, rising crime, an increase in illegal border crossing and Afghanistan.

McCormick, a former hedge fund CEO, is one of nine candidates in the May 17 GOP primary, led by television personality Dr. Mehmet Oz. A February 1-4, 2022 Trafalger Group poll of likely primary voters showed Oz leading with 27%, followed by McCormick with 16% and former US Ambassador Carla Sands with 15%. MOE: +/- 3%. 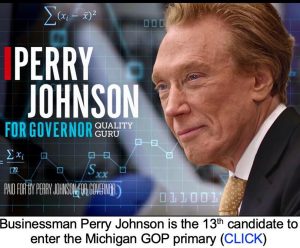 In Michigan, Republican gubernatorial candidate and businessman Perry Johnson kicked off his campaign with a $1.5 million ad buy for commercials that ran on NBC affiliates across Michigan during the Super Bowl and will continue through March 8.

In the ad Johnson, who entered the race January 27, introduces himself to voters as a "quality guru" who has decades of developing statistical methods for improving quality in the automotive industry.

He is one of more than a dozen candidates vying in the May 17 primary to challenge Democratic Governor Gretchen Whitmer in November.

Johnson pledged an initial $2.5 million of his own funds to his campaign and businessman Kevin Rinke, another self-funder who announced in November, committed contributing $10 million to his own bid. Detroit police chief James Craig, who raised just $1.4 million last year, holds a commanding lead in recent polling. 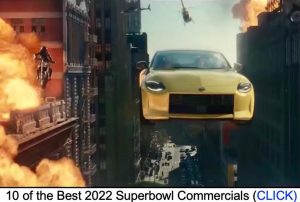 On a more fun note, check out the other Super Bowl ads you missed!

December 8, 2021 One of the more vilified and controversial members of Congress, of either party, is GOP Congresswoman Marjorie Taylor Greene from Georgia’s 14th congressional district. The...

January 18, 2022 With now more than two-thirds of state redistricting maps approved, the political landscape of the 2022 elections is finally coming into focus, with the final battles likely to be...