One of the newly recognized epicenters of the coronavirus pandemic in the United States is our country's jails and prisons.

The May 20th numbers represent a 19% increase in confirmed cases from the previous week, and an 11% increase in deaths. 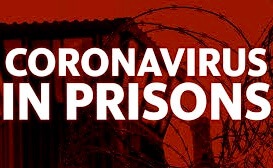 The surge in numbers, like in many parts of the country, corresponds with an increase in testing as outbreaks in prisons have mandated aggressive action. The escalating count also suggests the virus had been active in these communities much longer than known or reported.

States, however, vary greatly in their manner, methodology and phase, if any, of testing inmates and staff, and some with facilities are not reporting any results. Only sixteen states are releasing information on the number of their staff members tested for coronavirus, and that is only where an employee has volunteered that information.

While nationwide more than 7,400 prison staff, which includes correctional officers, nurses, chaplains, wardens and other workers, have tested positive, only 33 deaths have been reported.

Civil liberties groups and correctional officer unions have tried for months to warn state and federal agencies that the country's prison systems were unprepared to handle the pandemic.

Prisons are already a breeding ground for infectious disease, as they are designed to pack in as many people as possible, making social distancing near impossible. They also severely limit access to hygiene products and sanitizer, normally prohibited due to their alcohol content. The threat is multiplied by staff members working under close quarters, who can pass on the virus to family members and their communities. 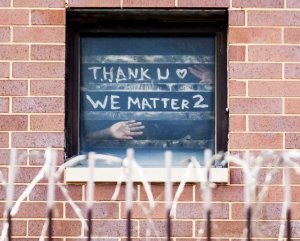 While the plight of prisons may be among the last to become public, the scorge of the pandemic has forced the issue into the spotlight.

At Illinois' Cook County Jail, which serves Chicago, over 700 inmates have tested positive, including seven who died, along with two correctional officers.

Michigan has lost 59 inmates to COVID-19, a third of those at Lakeland Correctional Facility, where 800 prisoners have tested positive.

At New York City's Rikers Island, the prison's chief doctor, on March 30th, tweeted out an alarm of "the public health disaster unfolding before our eyes."

To combat spread of the disease, albeit amid controversy, the city has released 2,600 prisoners considered at low crime risk and/or high risk to contract COVID. Rikers, however, is still home to 362 inmates with the virus, which has also infected more than 1,300 Department of Correction workers.

Ohio, with 28 prisons, has lost 66 inmates to coronavirus, more than any other state, but true numbers are hard to confirm as the state has decided against mass testing of all institutions. As of this week more than 4,500 inmates had tested positive, and 600 employees systemwide. 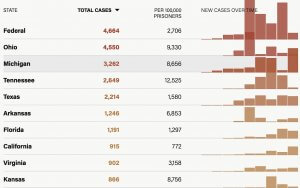 Check the Prison Stats in Your State (The Marshall Project/CLICK)

Inmates at Marion Correctional Institution, where more than 80% of the prison's population has been infected, are among those at three state facilities that have sued to enforce social distancing, to get access to cleaning supplies, and to raise the number of inmates being released.

Today, the US Supreme Court declined a request by the Federal Bureau of Prisons (BOP), which is under the jurisdiction of the Department of Justice (DOJ), to halt a district court order to transfer of 800 elderly or medically vulnerable inmates from FCI-Elkton, a low-security federal prison in Lisbon, Ohio.

Represented by the ACLU, inmates at the prison, where nine have died and approximately 225 have been infected from COVID-19, filed suit for relief from the facility which housed 150 prisoners per dormitory-style room, and is incapable of instituting social-distancing.

The BOP/DOJ's attempt to stop the transfer is on hold for now, but SCOTUS left open a door for the Trump administration to try again "if circumstances warrant." Justices Clarence Thomas, Samuel A. Alito Jr. and Neil M. Gorsuch would have granted the administration's request now. 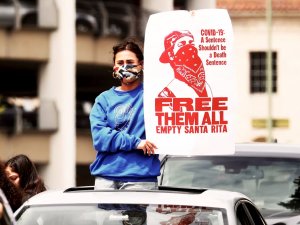 DemList will keep you informed.
Check the Prison Stats in Your State
Related
DemDaily: In Fauci We Trust 5/22/20
DemDaily: Defiance and Divide 5/15/20
DemDaily: Status of the States: Opening Up 5/11/20

DemList relies on your contributions to fund our work!

April 20, 2022 Thirteen mass shootings occurred across the United States last weekend, amidst a rise in fatal shootings nationally that continues to haunt our country — one that boasts a...