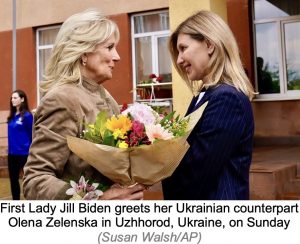 First Lady of the United States (FLOTUS) Jill Biden made an unannounced visit to western Ukraine on Sunday to highlight the United States' support for the besieged country, now in its 74th day of war with Russia.

The surprise Mother's Day stop, kept secret for security reasons, was part of a four-day tour to the war-torn country's Eastern European neighbors, which have provided safe haven for over 5.6 million Ukrainian refugees.

In her first solo trip to a combat zone as First Lady, Biden met with her Ukrainian counterpart, First Lady Olena Zelenska, who has been hiding out of public view at an undisclosed location with her two children since Russia invaded February 24th.

Biden spent Friday and Saturday in Romania and Slovakia visiting with US troops and meeting with Ukrainian refugee mothers and children before traveling to the southwest Ukrainian city of Uzhhorod to meet with Zelenska. 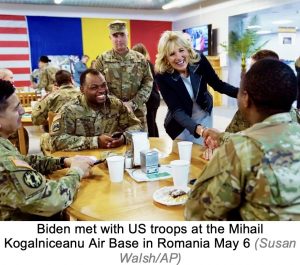 Zelenska thanked Biden for her “courageous act” saying, “We understand what it takes for the US First Lady to come here during a war when military actions are taking place every day, where the air sirens are happening every day -- even today.” The two met with children at a school used to temporarily house Ukrainian migrants.

Biden's visit, which also included a meeting with Slovakian President Zuzana Caputova, follows a recent trip by US House Speaker Nancy Pelosi and other members of Congress. In March, US Secretary of State Antony Blinken and US Defense Secretary Lloyd Austin also traveled to meet with President Volodymyr Zelenskyy in Kyiv.

The high-profile international diplomatic mission is unusual for Biden, who made the unprecedented decision to continue teaching full-time as a community college professor while her husband serves in the White House. It was not uncommon, however, for the compassionate educator and mother who has centered her efforts as First Lady around those roles and related issues.

Jill Giacoppa Biden
The 2020 Democratic Convention was the first introduction for many Americans to Dr. Jill Giacoppa Biden. Although she served as Second Lady of the United States for eight years, the reluctant political veteran has generally preferred to stay in the background. 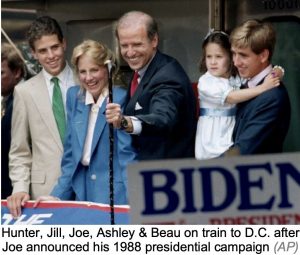 Born in New Jersey and raised in Willow Grove, Pennsylvania, Jill Biden was the oldest of five daughters born to Donald Jacobs and Bonny Jean Jacobs. She proudly claims her Italian heritage as Giacoppa, her original family name before it was anglicized by her grandfather.

Jill, who graduated from the University of Delaware, met Senator Joe Biden, nine years her senior, on a blind date set up by Joe's brother Frank in 1975. Biden was a widower with two young sons who lost his wife and baby daughter in a car accident three years earlier. Wary of entering the public spotlight, she declined his proposal five times before they were married in 1977.

She finished her Master's degree in Education from West Chester State College while pregnant with their daughter Ashley, who was born in 1981. After a few years, Biden returned to the classroom, teaching high school English and adolescents with emotional disabilities. In 1987, she received her second graduate degree, in English from Villanova University. 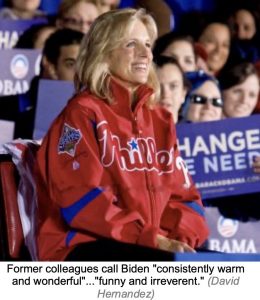 Educator, Author and Advocate
In 1993, after four of her friends were diagnosed with breast cancer, Biden started the Biden Breast Health Initiative in Delaware, which has educated thousands of high school girls about the importance of early detection of breast cancer. In 2007, Biden co-founded Book Buddies, which provides books for low-income children. An avid health advocate, she runs 25 miles a week and ran in the Marine Corps Marathon.

Under her maiden name of Jill Jacobs, she served as an English professor at Delaware Technical & Community College from 1993 through 2008, while earning her doctoral degree in education from the University of Delaware -- just one year before her husband was sworn in as Vice President of the United States. 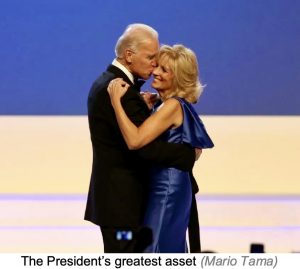 In 2010, she hosted the first-ever White House Summit on Community Colleges with President Obama, and in 2012 led a "Community College to Career Bus Tour. As a military mom, Biden became involved with Delaware Boots on the Ground and in 2011, with First Lady Michelle Obama, launched Joining Forces, an initiative to provide educational, health and wellness, and employment resources to military personnel and their families.

She published a 2012 children's book, "Don't Forget, God Bless Our Troops," and traveled abroad as an advocate for the rights, education and welfare of girls and women in Africa and Asia.

Unwavering Faith
After the Biden's son Beau passed away in 2015 from brain cancer, Joe and Jill Biden launched The Biden Foundation to continue the work they began under the Obama administration. The organization focuses on foreign policy, community colleges and military families, equality, strengthening the middle class, and Joe's Moonshot initiative to cure cancer. 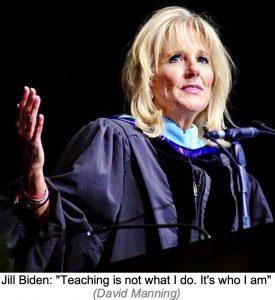 Throughout, Jill continued as a professor at NOVA, while also writing her best-selling memoir, "Where the Light Enters: Building a Family, Discovering Myself," released in 2019. She took a leave of absence from teaching to campaign full-time with Joe for his bid for President of the United States.

She was heavily involved in her husband's campaign, on the trail and as an advisor, and in June 2020 published the children's book "Joey: The Story of Joe Biden," which portrayed him as having been "brave and adventurous" as a child despite having a stutter and being bullied.

Our First Lady
As First Lady, Jill Biden has continued championing many of the causes that have defined her public life: supporting military families, advocating for educational opportunities, and working to end cancer as we know it.

As the President's closest advisor and perhaps greatest asset, she has also served as a key messenger for the White House’s most urgent priorities, including safely reopening schools, supporting the President’s economic agenda, and urging families to protect themselves and their communities by getting vaccinated against COVID. 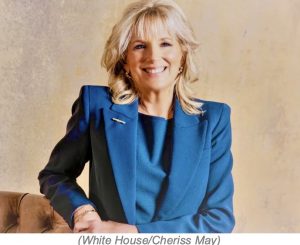 During her first year as First Lady, Dr. Biden traveled to 35 states, over 60 cities, and three other countries.