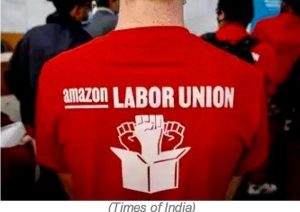 Amazon workers in Staten Island, New York, voted to unionize under the Amazon Labor Union on Friday, in the first successful United States organizing effort in the retail empire's history.

Warehouse workers cast 2,654 ballots, with 2,654 voting for the union to 2,131 opposed. Approximately 8,000 workers were eligible to vote. The win was a stunning victory for the fledgling group, which was led by former and current Amazon employees and is not affiliated with any national labor union.

Amazon workers in countries including France, Italy, Spain and Germany, whose union membership rates are higher than those in the US, have long been unionized. In many European countries, Amazon workers are covered by collective bargaining agreements that apply to whole sectors of the economy. The notable outlier is the United Kingdom, where labor laws are comparable to those in the US. 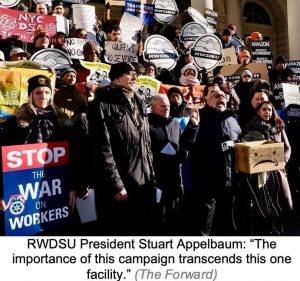 The union victory comes on the heels of another major win for labor last December, the unionization of the first Starbucks coffee store by baristas in Buffalo, New York. The triumph for Starbucks Workers United marked what union leaders hope is the beginning of a new era of growth for the labor movement.

2021 also saw the initial defeat of the only other recent attempt to organize Amazon workers, when employees in Bessemer, Alabama voted more than two-to-one against joining the Retail, Wholesale and Department Store Union (RWDSU). That April ballot, however, was invalidated by the National Labor Relations Board after it found that Amazon had improperly interfered in the election. The NLRB ordered a new union election, which was held last week.

As of today that result appears headed for defeat for a second time. Of 2,375 ballots cast, 993 opposed unionization and 875 voted in favor. Approximately 6,153 Bessemer warehouse workers were eligible to vote.

The election result has yet to be formally certified by the NLRB, however, as over 400 ballots remain challenged by Amazon and the RWDSU. The NLRB will hold a hearing in the coming weeks to decide whether the challenged ballots will be opened and counted. 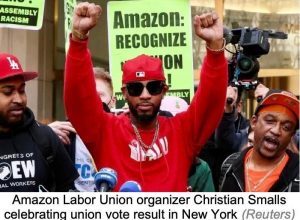 The Staten Island campaign was driven by former Amazon supervisor Christian Smalls, who was fired from Amazon in March 2020 after staging a walkout over the lack of worker protections against COVID-19.

Shortly after being fired, Smalls formed the Amazon Labor Union (ALU), relying on a GoFundMe page to finance the operation.

After a failed attempt to garner enough employee signatures to petition for a vote in November, Smalls met the 30% threshold necessary for the April 1 election.

Amazon, long known for its anti-union efforts in the US, pushed back hard in the lead-up to both elections in Staten Island and Bessemer. The company held mandatory meetings, where workers were told unions are a bad idea, launched an anti-union website targeting workers, and placed English and Spanish posters with anti-union rehtoric across the Staten Island facility. 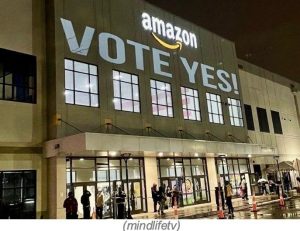 In February 2021 New York Attorney General Letitia James filed a lawsuit claiming Amazon prioritized profit over worker safety at its New York facilities and retaliated against employees, like Smalls, who voiced concerns for their safety during the pandemic. In October, a federal judge rejected Amazon’s bid to have James’ suit tossed out.

Amazon Labor Union members are seeking longer breaks, paid time off for injured employees, and an hourly wage of $30, up from a minimum of just over $18 per hour offered by the company. The estimated average wage for Staten Island is $41 per hour, according to a similar US Census Bureau analysis. 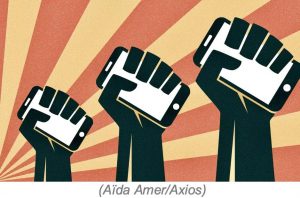 New Labor
ALU's next organizing target is a neighboring Amazon warehouse in Staten Island, where a separate union election is scheduled to be held in late April.

Labor's intensified organizing effort is no accident, following the unforeseen consequences of the pandemic in which people are rethinking their priorities and relationship to work.

As laid bare by the crisis, exhausted front-line and "essential" workers are feeling undervalued and frustrated with employers for failing to raise pay to match new profits and rising inflation.

Americans are leaving their jobs in droves, and the new labor shortage in the labor market has emboldened workers to exercise newly found leverage to negotiate for better wages and working conditions.

If the Starbucks unionization drive is any indication of a reinvigorated labor movement, then union leaders should be encouraged.

Since organizing the first Starbucks in Buffalo, nine other stores have voted to join Starbucks Workers United and close to 190 other Starbucks stores across 26 states have petitioned the NLRB for union elections.

February 4, 2020 Iowa: Day Two In a unprecedented and chaotic scenario in which a glitch in Iowa’s new tallying process delayed yesterday’s results for almost 24 hours, partial...