Last night's Golden Globe Awards were flush with speeches about a new era of non-discrimination in Hollywood and the country, but the best performance of the night went to entertainment mogul Oprah Winfrey. 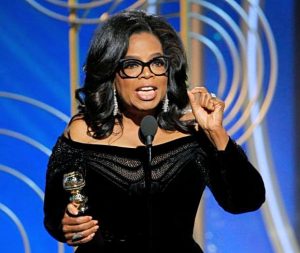 Oprah "A new day is on the horizon" (pic aol)

Winfrey, who joined other attendees in wearing solidarity black in support of those who have been victims of sexual harassment, took the stage to accept the Cecil B. DeMille Lifetime Achievement Award.

The award-winning actress, producer, business executive and philanthropist spoke powerfully about history, unity and the  courage to speak truth to power, bringing an enthusiastic audience to their feet, and launching what may be the unofficial beginning of a presidential bid.

Winfrey, whose networth is estimated by Forbes at $2.8 billion, oversees a financial empire that includes her own network,  magazine, production company, and several philanthropic organizations.

The former talk-show host and Presidential Medal of Freedom recipient is considered one of the country's, if not the world's, most inspirational and influential figures -- whose popularity spreads across cultural, socio-economic and political lines.  Should she decide to run, many feel she would be uniquely positioned to go toe-to-toe with the equally unconventional President Trump.

The evening also proved a promotional vehicle for Time's Up Now, a new organization initiated by four female agents at Creative Artists Agency (CAA), with the support of now over 300 actors, directors, film and music executives. 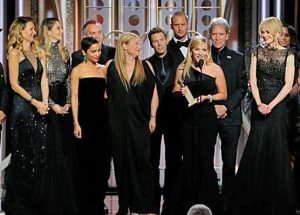 Reese Witherspoon on accepting for Big Little Lies, "Time's Up! We see you, we hear you and we will tell your stories."

The Time's Up Legal Defense Fund, which provides subsidized legal support to those who have experienced sexual harassment, assault, or abuse in the workplace, announced it reached its fundraising goal of $15 million yesterday.

In support of the effort, many of Hollywood's leading actresses walked the red carpet with activists in the women's rights community. Among the actresses and guests:

* Laura Dern and guest Monica Ramirez, the founder of Alianza Nacional de Campesinas,
* Amy Poehler and guest Saru Jayaraman, attorney and co-founder of Restaurant Opportunities Centers United,
* Susan Sarandon and guest Rosa Clemente, the first Afro-Latina to run for Vice President in the US (Green Party 2008),
* Emma Stone and guest Billie Jean King, famed tennis star and founder of the Women's Tennis Association, whom Stone portrays in her Globes-nominated role in Battle of the Sexes,
* Michelle Williams and guest Tarana Burke, Director of Girls for Gender Equity and founder of the "Me too" movement, * Emma Watson and guest Marai Larasi with Imkaan,
* Shailene Woodley and guest Calina Lawrence, activist with the Water is Life/Standing Rock movement, and * Meryl Streep who brought Ai-Jen Poo, Director of the National Domestic Workers Alliance.

Of Oprah's speech, Streep said, "She launched a rocket tonight. I want her to run for president. I don't think she had any intention [of declaring]. But now she doesn't have a choice." 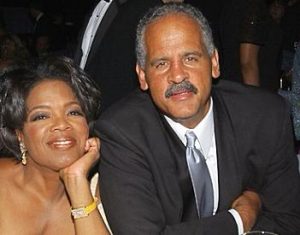 Pundits today said sources confirmed that Winfrey is "actively thinking about" about a presidential run in 2020, and her longtime personal partner, Stedman Graham said, "It's up to the people. She would absolutely do it."

December 12, 2018 The second-largest ethnic group in the United States, the Latino community compromises approximately 18% of the US population and 11% of the voting electorate. Often referred to...

January 6, 2021 One year has passed since the deadly insurrection at the United States Capitol. On January 6, 2021, as members of Congress met to certify the results of the 2020 presidential...