The 117th Congress was sworn in yesterday, January 3rd, kicking off a dramatic week of events that will include the runoff elections in Georgia Tuesday and a joint session Wednesday to certify the Electoral College votes. 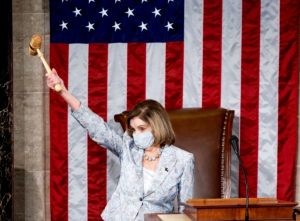 It is usually a day marked by celebrations, office parties and corporate events welcoming the new Members of Congress. Under the confines of the coronavirus protocols, however, a masked Capitol Hill adapted to modified procedures, with only one guest for freshman members permitted in the gallery, and groups of members taking the oath in rounds over several hours.

The centerpiece of the formal agenda was the election of Congresswoman Nancy Pelosi (CA) as Speaker of the House, her historic fourth term with the gavel.

At 4:49pm Pelosi was proclaimed the winner, with 216 votes to Republican Kevin McCarthy's 209. Three additional members voting present and two voting for other individuals.

Congressman Jared Golden (D-ME) voted for Illinois Democratic Senator Tammy Duckworth - the Constitution doesn't require the speaker to be a House member - and Congressman Conor Lamb (D-PA), voted for Congressman Hakeem Jeffries of New York, who is expected to be a strong contender to succeed Pelosi whenever she steps down. 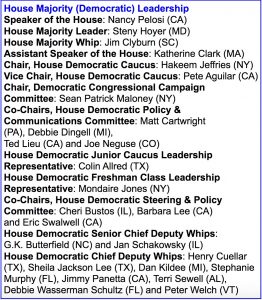 Congressman Alcee Hastings (D-FL), who has been battling cancer, missed the vote, and Louisiana's 5th CD was without representation due to the death of Congressman-elect Luke Letlow from COVID just five days before.

Among the inductees was Republican Mariannette Miller-Meeks, who was "provisionally" sworn in as Iowa's 2nd CD Congresswoman after a recount certified her the winner by six votes, the closest House race in decades.

Miller-Meeks' Democratic challenger, Rita Hart, has appealed to the US House to conduct a review of the vote, which includes thousands of ballots marked as undervotes and overvotes that were not reviewed during the recount, and at least 22 lawfully cast votes, including 18 for Hart, which were wrongly excluded due to bureaucratic and legal errors. 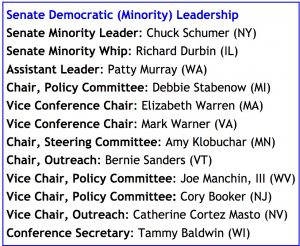 Georgia had two US Senate seats up in 2020. The first was the regular election for incumbent Republican David Perdue, and the second, a special election to fill the remaining term of Republican Johnny Isakson who left the Senate in December of 2019.

In the November 3rd elections, no one candidate in either race received 50% or more of the vote in the open election system, so both seats went to a January 5th runoff election.

With control of the Upper Chamber hinging on the outcome, all fundraising records have been broken - with the four candidates, collectively, raising over $340 million over the last two months. 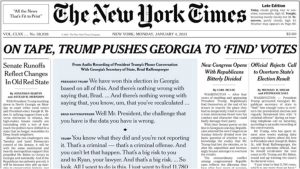 As of this morning, more than three million Georgians had voted early, including over 117,000 voters who cast a ballot in this election but who did not vote in the November election.

In a press conference this afternoon, Georgia Election officials strongly rebuked President Trump's past, and most recent efforts, to disrupt both the Georgia and presidential election results.

Trump has repeatedly attacked the state's Republican-controlled leadership for allowing certification of Joe Biden as the victor in the Peach State by 49.5% to 49.3% over Trump - a vote margin of almost 12,000 votes.

In a shocking recording of a phone call released yesterday, Trump berated and threatened Georgia Republican Secretary of State Brad Raffensperger if he did not agree to go along with the President's false claims of voter fraud. In what has been decried as a flagrant abuse of power and a blatant criminal act, Trump instructed Raffensperger to "find 11,780 votes" and recalculate the vote in his favor.

THE FINAL COUNT
Trump and the GOP, however, are still not finished with their last-ditch efforts to prevent Biden from being seated as the 46th president of the United States. 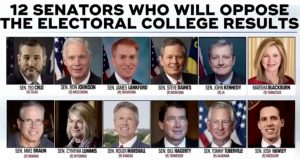 This Wednesday, January 6th, in what is normally a perfunctory process, the House and Senate will meet in a joint session to count and certify the votes cast by the Electoral College in the presidential election.

In more high drama, 12 GOP Senators and more than 100 GOP House members have pledged to challenge the results in several battleground states, charging the elections were rife with fraud, despite court and official rulings to the contrary.

While the objections will not change the outcome of the election, it will prolong the process with mandated debate time, meaning the session is likely to continue well into the night.

December 14, 2020 Members of the Electoral College are meeting in all 50 state capitols and DC today, December 14th, to cast their votes to complete the official process of making Joseph Biden the...