History was made in the nation's Capitol today with the swearing in of the most racially and gender-diverse Congress in its 230-year tenure. It also marked an unprecedented level of representation by women in a year that celebrates the 100th anniversary of women having the right to vote.

The promise of the 2018 midterm elections could be felt throughout the House chamber as, at 2:05pm today, Congresswoman Nancy Pelosi (CA) reclaimed the Speakership, having served as Speaker from 2007 to 2011, the last time the Democrats had control of the House. 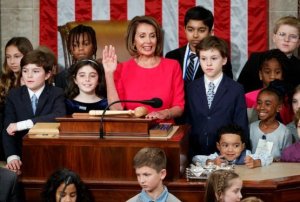 Not since Sam Rayburn in 1949 has a Speaker reclaimed the gavel, and the election of Pelosi, the first and only female to hold the post, further cements the California Democrat's place in history as the most powerful woman of our times.

Although the numbers are still far from reflecting the proportionate representation of America's female population, for the first time African Americans and Asian Americans have reached parity in the makeup of the US Congress.

The 116th Congress
With control of the US House of Representatives, Democrats are wasting no time in exercising their new power, with anticipated votes as early as tonight in an attempt to force re-opening of the US Government.

The partial government shutdown over Trump's quest for funding for his "wall" along the US-Mexico, is now in its 13th day and the President is showing no signs of compromise.

The new Committee Chairs of the House were also confirmed today, marking the beginning of a new era of anticipated investigations into Trump, his family, his campaign associates and collusion with Russia in its cyber attack on the 2016 election. 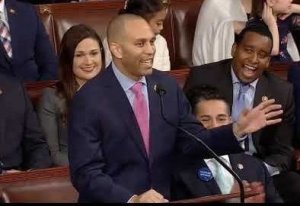 "Nancy Pelosi is just getting started. In the 116th Congress she will continue to fight hard for the people.

Nancy Pelosi will fight for lower healthcare costs, strengthen the affordable care act, protect people with pre-existing conditions, increase pay for everyday Americans, inact a real infrastructure plan, clean up corruption, defend the Dreamers, fix the Voting Rights Act, and end the era of voter suppression once and for all.

Nancy Pelosi is ... a sophisticated strategist, a legendary legislator, a voice for the voiceless, a defender of the disenfranchised, a powerful, profound, prophetic, principled public servant, and that is why we stand squarely behind her today.

Let me be clear, House Democrats are down with NDP, Nancy D'Alesandro Pelosi, the once and future Speaker of the United States House of Representatives."  -- Congressman Hakeem Jeffries