The contenders have launched their presidential campaign ads and, in a true sign of the times, candidates have spent more on the two largest digital platforms, Facebook and Google, than on traditional television ads. 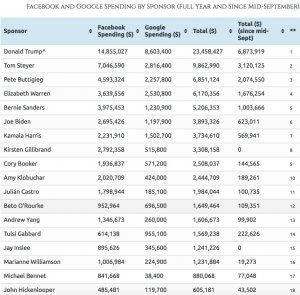 Not surprisingly, the bulk of spending has been over the last six weeks, with buys from September 12th through October 20th accounting for 20% of that total. That is on Facebook and Google alone.

At the top of the list: Donald Trump, whose campaign and joint fundraising with the RNC have spent $23.5 million on digital advertising, $6.8 of which has been since mid-September.

Tom Steyer was second, with $9.86 million total in Facebook and Google ad spending and $3.1M in the last six weeks. His Need to Impeach Super PAC spent an additional $3.96M. 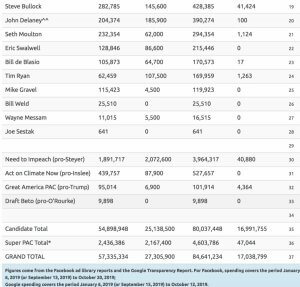 Joe Biden and Kamala Harris were each at roughly $3.8 million total.

While, at some point, television spending will dominate, the online courtship is helping build the lists and fundraising base to keep candidates in the race.

Television ad spending by the presidential contenders has also ramped up over the past six weeks at $22.5 million, nearly 60% of the total $38.8 million invested this year.

The blitz of Trump ads have aired on local television in Iowa, New Hampshire, South Carolina and Nevada, and on the national networks and cable.Trump has spent just under $5 million, primarily on attack ads against Joe Biden and the impeachment investigations.At the top of the list: Tom Steyer, who has spent $27.3M, $14.3M of which was spent between September 12th and October 20th.

According to Wesleyan, Elizabeth Warren has yet to spend a single dollar on television advertising, and fellow frontrunner Joe Biden has spent just $600,000. 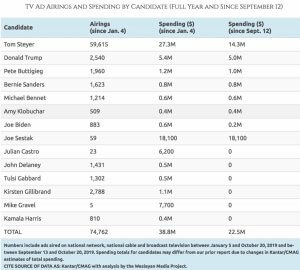 As of mid-September, Facebook, including Instagram, has earned $44.3 million from selling ads to presidential candidates and supportive committees. Google, including YouTube, had taken in over $21 million.

Out of the Race: Of the candidates listed under digital spending, Bill de Blasio, Kirsten Gillibrand, Jay Inslee, John Hickenlooper, Seth Moulton, Eric Swalwell, Tim Ryan and Mike Gravel have dropped out of the race.