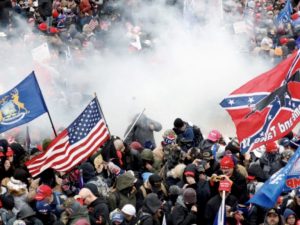 One year has passed since the deadly insurrection at the United States Capitol.

On January 6, 2021, as members of Congress met to certify the results of the 2020 presidential election, Trump supporters, at the behest of the President, violently breached the Capitol building in an attempt to stop the transfer of power to President-elect Joe Biden.

The five-hour siege resulted in injury to more than 200 people and the deaths of nine, including five Capitol Hill police officers. The Capitol grounds and building suffered an estimated $1.5 million in damages.

The impact of what was literally and figuratively an assault on our democracy has since reverberated far beyond the events of that day as we still struggle to find accountability for the consequences, and what now defines us as a country.

While the divisions that fueled the assault are still playing out in elections, legislatures and living rooms across the country, the courts and Congress are attempting to identify and pursue the players who are responsible for inciting and carrying out the historically devastating event.

On January 13th, one week after the storming of the Capitol, the US House of Representatives impeached President Donald J. Trump for "high Crimes and Misdemeanors." The charge was "willfully inciting violence against the Government of the United States" with a speech to supporters "that encouraged - and foreseeably resulted in - imminent lawless action at the Capitol."

Now a year into the investigations that have uncovered collusion at every level of former President Trump's administration and inner circle, President Biden marked the anniversary with his most forceful comments yet -- laying the blame squarely at the feet of his predecessor. 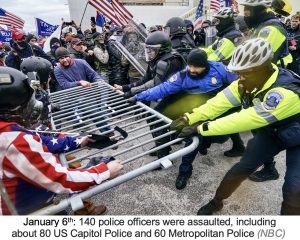 Arrests: 725+ individuals from nearly all 50 states and the District of Columbia. Charges in both District and Superior Court include:
* 225 with assaulting, resisting or impeding officers or employees, including 75 with using a deadly or dangerous weapon or causing serious bodily injury to an officer.
* 10 with assaulting a member of the media, or destroying their equipment.
* 640 with entering or remaining in a restricted building or grounds, including 75 with a dangerous weapon.
* 45+ with destruction of government property, and over 30 defendants with theft of government property. 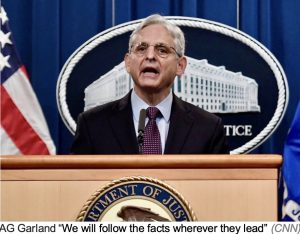 * 275+ with corruptly obstructing, influencing, or impeding an official proceeding, or attempting to do so.
* 40 with conspiracy, either: (a) to obstruct a congressional proceeding, (b) to obstruct law enforcement during a civil disorder, (c) to injure an officer, or (d) some combination of the three.

Pleas: 165 individuals have pleaded guilty to various federal charges, from misdemeanors to felony obstruction, many of whom will face incarceration at sentencing.

Sentencings: 70 federal defendants have been sentenced, including 31 to periods of incarceration, 18 to a period of home detention, and the others to probation with no term of incarceration.

The government estimates that as many as 2,500 people who took part in the events of January 6th could be charged with federal crimes, including 1,000 incidents of assault.

The House Select Committee to Investigate the January 6th Attack on the United States Capitol
The bipartisan January 6th Committee, created by a vote of Congress on May 19th, is charged with conducting "an investigation of the relevant facts and circumstances relating to the attack on the Capitol,} and to "identify, review, and evaluate the causes of and the lessons learned from this attack, and submit a report containing findings, conclusions, and recommendations to prevent future acts of violence."

The Committee has so far received over 35,000 documents, interviewed more than 300 witnesses, issued over 50 subpoenas, and held two former Trump advisors in contempt of Congress for failing to cooperate.

One of the tasks of the Committee, as stated by Vice Chair Liz Cheney (R-WY), is to determine, "Did Donald Trump, through action or inaction, corruptly seek to obstruct or impede Congress' official proceedings to count electoral votes?"

The Committee's final work will be released in two reports this year. The first is an interim report, expected out this summer, which will serve as a progress report for the Committee’s investigation. The final report will include recommendations to Congress on what to do to prevent another attack.

Of the results, Committee member Congressman Pete Aguilar (D-CA) said this week, "Our responsibility is to make this public, to tell this story, to make sure that we are doing what we can, legislatively, to ensure that we preserve and protect democracy, and that this never happens again."

DemDaily: Because Every Day is Veterans Day – Helmets to Hardhats

Today we officially honor our veterans, but there are organizations that pay tribute to their service by working every day to help veterans find jobs and resources.