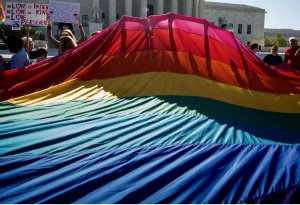 LGBTQ Demonstrators outside the Supreme Court. SCOTUS' website was overloaded and crashed when the decision was announced (KenCedeno/Corbis)

In an historic win for supporters of LGBTQ rights, the Supreme Court of the United States (SCOTUS), released its decision in Bostock v. Clayton County this morning, ruling that federal civil rights law protects gay, lesbian and transgender workers in the workplace.

The landmark ruling is also a major defeat for the Trump administration, which argued that Title VII of the Civil Rights Act of 1964, which bars discrimination based on sex, did not extend to claims of gender identity and sexual orientation.

The decision came as a surprise from the majority conservative court, with Chief Justice John Roberts joining the four liberals on the bench, along with fellow conservative Neil Gorsuch, who wrote the opinion in the 6-3 decision.

Of important note is that Roberts, as the senior justice in the majority, decided that Gorsuch, considered a "textualist," should author the opinion. In that respect Gorsuch believes that the meaning of a law turns on its words alone, not on the intentions of the law's drafters.

Accordingly, Gorsuch, a Trump appointee, said the expectations of whether or not law makers believed they were banning LGBTQ discrimination when they drafted the 1964 law does not matter. 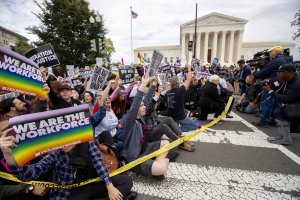 1 million US workers identify as transgender and 7.1 million as lesbian, gay and bisexualworkers (ManuelCeneta/AP)

In direct contrast, Justice Samuel Alito, joined by Trump appointee Justice Brett Kavanaugh and Justice Clarence Thomas, wrote in his dissent, "even if discrimination based on sexual orientation or gender identity could be squeezed into some arcane understanding of sex discrimination, the context in which Title VII was enacted would tell us that this is not what the statute's terms were understood to mean at that time."

SCOTUS' ruling was based on three cases, led by Bostock v. Clayton County, Georgia in which Gerald Bostock was fired from his job as child welfare services coordinator when the county found out he played on a gay softball team.

In Altitude Express Inc. v. Zarda, Donald Zarda, who has passed away since filing the case, claimed he was discriminated against as a gay man when he was fired from his job as a sky diving instructor.

In R.G. & G.R. Harris Funeral Homes v. EEOC, Aimee Stephens, who has also since passed, was fired as the director of a funeral home for being a transgender woman. Stephens' case also marked the first time the court heard arguments regarding the civil rights of a transgender individual.

Today's decision in one of several case in recent years involved the rights of our country's LBGTQ citizens.

The same citizens, however, were not granted equal rights in SCOTUS' 2018 opinion in Masterpiece Cakeshop v. Colorado Civil Rights Commission, which held that religious and philosophical objections to same-sex marriage were protected under the Free Exercise Clause of the Constitution. Hence, a cake shop owner had the right to refuse to make a wedding cake for a same-sex couple. 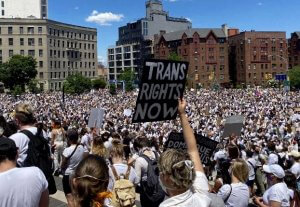 The Bostok decision is likely to open the door to other challenges to discrimination on the basis of sexual orientation. Indeed, Alito "warned" in his dissent that "the military's transgender ban is now even harder to defend."

In April, 2019, President Trump ended an Obama-era policy that allowed trans men and women to serve openly and to receive transition-related medical care while enlisted.

Bostok, however, still does not mean all employers are bound to the ruling. The Supreme Court is expected to hear a case next Fall on whether to grant employers with religious objections to LGBTQ people an exemption from anti-discrimination laws.

In the interim, last Friday, the Trump administration finalized a rule that rolls back civil rights protections for LGBTQ people when it comes to health care and health insurance.

May 14, 2021 The Center for Disease Control and Prevention (CDC) announced yesterday that fully vaccinated Americans can unmask indoors and out, signaling the beginning of the end of the deadly...