Now less than three months from the November elections, an NBC poll shows that Americans are shifting their focus, identifying "threats to democracy" as the number one issue facing the country.

By traditional metrics, Republicans should be headed toward big gains this Fall, as the party in the White House usually loses an average of 26 US House seats in the midterm elections.

The "red" tsunami, however, appears to have been reduced to a wave on the heels of the Supreme Court's reversal of Roe v. Wade, the investigations into former President Donald Trump, and major legislative gains by the Biden administration.

While President Biden's historic achievements have yet to register in his approval rating, which stands at just 42% in the NBC poll, Democratic enthusiasm for voting in the midterms has risen significantly, nearly tying with Republicans at 66% to 68%. That two-point GOP advantage is down from 17 points in March and eight points in May.

While "threats to democracy" has not been among past polling questions, it is nevertheless astounding that the category, at 21%, usurps cost of living (16%) and the economy (14%), which historically poll as the top issues going into any election.

The shift may be due, in part, to a slight easing in inflation last month, with gas prices dropping below $4 per gallon. Although still underwater at 40%, approval of Biden’s handling of the economy has risen seven points since May.

Regardless, it is clear that Americans are increasingly concerned about the assault on their election system and government, putting democracy itself on the ballot. And the face of that assault is Donald Trump.

50% of voters say Trump is solely or mainly responsible for January 6 -- up 5 points since the May NBC News poll, before the House committee investigating the attack began holding multiple televised hearings.

According to the survey, 57% of registered voters say that the investigations into alleged wrongdoing by Trump should continue, while 40% say they should stop.

With the January 6 Committee hearings continuing in September, and the investigation into Trump's hidden trove of classified documents at Mar-a-Lago only escalating, Democrats are hoping to keep corruption by Trump, who is also the face of the GOP, front and center in the minds of the voting public. 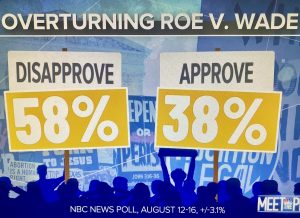 The issue also appears to be driving another Democratic advantage -- anger.

When polling respondents were asked if they are so upset about something that they would carry a protest sign for a day, 79% of Democrats said yes, citing "women's rights."

Only 48% of Republicans said yes, citing "impeach Biden" as the top choice for the sign.

While Democrats are building momentum that may defy the historical trend of major losses in the midterms, they must walk a fine line with a public that is unprecedentedly pessimistic about the political environment overall.

According to the poll, three-fourths of Americans (74%) think the country is headed in the wrong direction and 58% think America's best years are behind us. Both parties scored a mere 34% positive rating.

Under any circumstances, this promises to be another exceptional election.