2021 is a key year for mayoral races. Nearly 200 cities with populations of 30,000 or more have or will be holding mayoral elections this year, including open races in major cities such as Atlanta, Boston, Cincinnati, New York, Seattle, and more.

Nationwide, there are over 1,400 mayors representing cities with a population of 30,000 or more. Of the largest 100 cities, 64 mayors were Democrats, 26 Republican, four Independents, and six nonpartisan or unaffiliated. 27 of those will hold mayoral general elections November 2, 2021.

Although many officeholders and candidates are affiliated with political parties, in most cities the mayoral elections are officially nonpartisan and hold open primaries. In that case, the top two vote-getters advance to the general election or runoff, regardless of party. 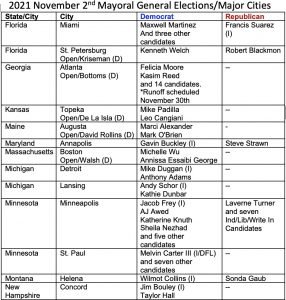 City Council President Felicia Moore and former Mayor Kasim Reed top the list of 16 candidates running to succeed Democratic Mayor Keisha Lance Bottoms, who announced she would not run for a second term in May.

An October 6-20, 2021 Atlanta Journal-Constitution poll of likely voters showed Moore and Kasim in a statistical dead heat with 23.8% and 20.4% respectively, but with 41.4% of voters undecided.

In a September-October 8, 2021 Baldwin Wallace University poll business and nonprofit executive Justin Bibb held a 9% advantage over City Council President Kevin Kelley with 34.5% to 24.9% respectively. 40% of voters, however, said they were still undecided.

In the race to succeed two-term Mayor Marty Walsh, who resigned in March to become US Secretary of Labor under President Joe Biden, Democratic City Councilors Michelle Wu and Annissa Essaibi George emerged from a seven-candidate primary.

An October 15-17, 2021 Suffolk University poll of very likely voters showed Wu opening up a wide lead with 62% to Essaibi George's 30%, with 7% undecided. The contest is already a historic one, as the winner will become the first woman and the first person of color to be elected mayor of Boston -- breaking the city's streak of previously electing only white men as mayor. 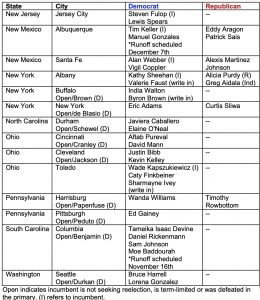 City Council President Wanda Williams unseated incumbent Eric Papenfuse by 56 votes in the May primary to secure the Democratic nomination, and may be on her way to becoming the city’s second Black and second female mayor.

She is facing Republican Timothy Rowbottom, a nonprofit businessman who has blamed public schools for his daughter identifying as “lesbian or bisexual" and publicly branded LGBTQ people an “abomination” and "bad seeds" who create “oppression and repression” for themselves.

In an October 12-15, 2021 Northwest Progressive Institute poll 48% of likely voters said they were voting for Harrell, compared to 32% for González, with 18% undecided.

Go to iwillvote.com for voting information in your area!

August 10, 2018 While most of Washington is focused on figuring out the author of the anonymous New York Times op ed that describes the “resistance” within the White House...