Once the bellwether of the country, the Midwest battleground state of Ohio broke its 60-year record of voting with the winning presidential candidate when it voted for Trump by eight points in 2020.

Democrats have a chance of winning back some of their lost ground over the last decade with what is now a toss-up Senate race between Democrat Congressman Tim Ryan and Republican J.D. Vance, a venture capitalist and bestselling Hillbilly Elegy author. 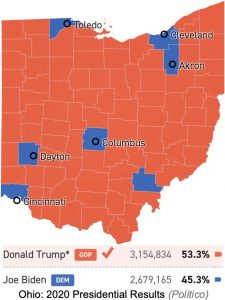 The polling gap in the race to replace retiring GOP Senator Rob Portman has closed to a statistical dead heat, giving Democrats hope of flipping the seat in their quest to maintain control of the US Senate.

Portman, a moderate Republican, succeeded retiring two-term Senator George Voinovich in 2010 and was reelected in 2016 with 58% to former Democratic Governor Ted Strickland's 37.2%.

In the contentious May 3, 2022 GOP primary, Portman endorsed former Ohio Republican Party Chair Jane Timken, who placed fifth of seven candidates. Vance, who won the nomination with 32.2%, surged to the front of the field after a late endorsement by former President Donald Trump.

A 10-term Congressman who represents the Youngstown-based 13th District, Ryan easily swept the Democratic primary with 69.6%.

Ryan, who waged a brief presidential campaign in 2020, had the early support of Ohio's senior US Senator, Democrat Sherrod Brown (D), who last won re-election in 2018 by seven percentage points.

On Monday, Ryan and Vance went toe-to-toe in their first televised debate, hosted by Nextstar Media in Cleveland. 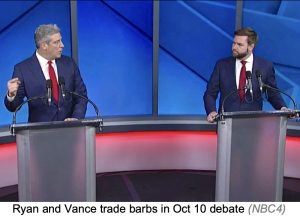 The fiery, and sometimes personal, debate underscored the stakes of the unexpectedly tight race in the red-leaning state. The issues reflected many of those on the national front, with Vance hitting Ryan on the economy, inflation and crime, while Ryan challenged Vance on foreign policy and his pro-life stance.

While no clear winner emerged, Ryan is credited with the best line of the night in referencing comments by Trump about Vance during a recent rally. “He was called an ass-kisser by the former President,” Ryan said. "Ohio needs an ass-kicker, not an ass-kisser.”

Follow the Money
Vance's attempts to paint Ryan as a "career politician" are likely to be echoed in advertising by outside groups, including Senate Minority Leader Mitch McConnell's super PAC, the Senate Leadership Fund, which is spending $28 million in advertising to support Vance.

Of the $15 million in GOP ads reserved in Ohio for the remaining month, $13.5 million are from SLF. Democrats, meanwhile, have just $5 million booked, nearly all from Ryan’s campaign.

Ryan, however, is setting records on the fundraising front, reporting he raised $17.2 million in the third quarter, for a total of close to $39 million.

Vance has not announced his fundraising totals for the quarter, which are due by October 15th, but had raised close to $2.38 million in the second quarter, including a $700,000 loan to his campaign.

September 22, 2022 There are more than two dozen heavily contested “toss ups” that will decide control of the US House of Representatives in one of the most high-stakes midterm...