House Impeachment Managers on Friday made their closing arguments in the fourth and final day of the prosecution's presentation in impeachment trial of President Donald J. Trump.

Day Four
After walking through the evidence against Trump for Abuse of Power on Thursday. House Managers spent most of Friday methodically presenting the case against the President for Obstruction of Congress.

It was the closing remarks of lead House Manager Adam Schiff (D-CA), however, that will go down in the history books as perhaps the most memorable point in the trial -- at least to-date. 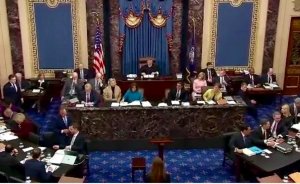 Schiff's powerful and emotionally compelling speech set off a mass social media explosion, with video going viral, including millions of views on Schiff's twitter feed, along with a flurry of hashtags including #RightMatters, #TruthMatters, #AmericansWantWitnesses and #AdamSchiffHasMyRespect.

Schiff tried to preempt the President's defense team by going through anticipated arguments and disputing  them one by one.

Schiff's reference to a CBS News report that a Trump confident warned GOP Senators, "vote against the president and your head will be on a pike," comparing the President to a monarch, incensed some of the Republicans present.  His comments were part of his appeal for a fair trial and likely aimed at persuading the four moderates needed to vote in favor of calling witnesses.

Indeed, his final remarks were a passionate plea to the consciences of the Republican Senators in the chamber to have "moral courage" to go against their party and remove Trump from office, saying, "He is who he is, You know it's not going to stop... It's not going to stop unless the Congress does something about it." 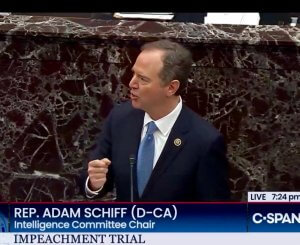 Schiff reminded his colleagues how "unforgiving history can be of our conduct,"..."But for a single decision we may be remembered, affecting the course of our country. I believe this may be one of those moments...a moment when our democracy was gravely threatened. Not from without, but from within."

In the short two-hour session, which began at 10:00am, they focused on arguing that the charges in the Articles of Impeachment do not amount to impeachable offenses. At no point did they deny any of the actual evidence or acts committed by the President, but painted a picture of conspiracy by the Democrats.

Cipollone said, "They're asking you to remove President Trump from the ballot in an election that's occurring in approximately nine months." 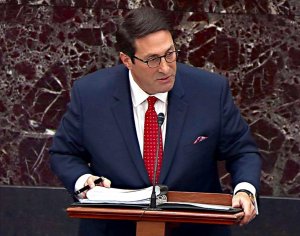 "Impeachment shouldn't be a shell game...To stop an election, to interfere in an election, and remove the President of the United States from the ballot? Let the people decide for themselves. That's what the founders wanted. That's what we should all want," said Sekulow.

Next Up
The defense will continue Monday, January 27th at 1:00pm ET. As with the House Managers, Trump's lawyers will have 24 hours over three days to make their case.

After the defense rests, Senators will have 16 hours to ask questions in writing. Chief Justice John Roberts will read the questions out loud to the defense or prosecution to answer.

The 2016 presidential election continues to set records, including an unprecedented number of primary debates … the current Democrat and Republican DebateSchedule.

July 9, 2019 Billionaire, environmentalist and and progressive activist Tom Steyer announced his bid for the presidency this morning, becoming the 26th Democratic candidate to enter the crowded...