In honor of former President Barack Obama's upcoming birthday, a snapshot of his record, and a reminder of the days under the most popular President of our time.

Although views shift with time, the 44th President and our country's first African-American Commander-in-Chief, will likely be remembered for peace, health and prosperity.

Obama, who turns 57 this Saturday, entered office during one of the worst economic downturns in decades, but passed a trillion dollar stimulus, added a net 11.6 million jobs, raised average wages by 4% and ended with the highest level of household income ever recorded.

He began the process of getting us out of Afghanistan and Iraq, and domestically the homicide rate dropped to the lowest on record in his second term.

While his presidency may not have been as transformative as some had hoped, the progressive movement flourished while Obama was in the White House. Whether by inspiration, or by debate and division over its future, a new progressive movement emerged -- and now at the forefront of fighting President Trump, who seems determined to wipe out his predecessor's legacy.

Regardless, for now, the numbers are still in Obama's favor.

The Obama Record
FactCheck.org
* The Economy: gained a net 11.6 million jobs. The unemployment rate dropped to below the historical norm.
* Worker Wage: Average weekly earnings for all workers were up 4.0% after inflation.
* After-Tax Corporate Profits: set records, as did stock prices. The S&P 500 index rose 166 percent.
*  Health Insurance Coverage: The number of people lacking health insurance dropped by 15 million.
* The Federal Debt: owed to the public rose 128%.
* Home Prices: rose 20%. But the home ownership rate hit the lowest point in half a century.
*  Illegal Immigration: declined. by 35% between US-Mexico.
* Wind and Solar Power: increased 369%. Coal production declined 38 percent. Carbon emissions from burning fossil fuel dropped 11%.
* Handgun Production: rose a record 192%.
* The Murder Rate: dropped to the lowest on record in 2014, but rose before Obama left office. 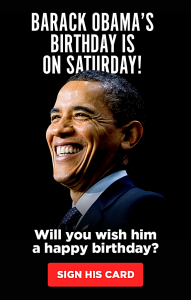 Post-Presidential
The latest on the Obamas
DemDaily: Michelle's Movement 7/19/18
DemDaily: Obama Out of the Shadows 6/14/18

Today marks the 50th anniversary of the death of legendary civil rights leader Dr. Martin Luther King, Jr. One of history’s most significant visionaries and voices, he was struck down by an...

December 17, 2020 In the most significant security breach of US government networks in more than five years, foreign hackers linked to Russian intelligence have penetrated the networks of at least...