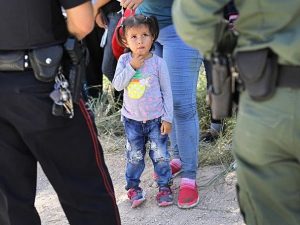 The Trump administration is under siege for its "zero tolerance" immigration policy, which calls for the prosecution of migrants who attempt to illegally cross the United States-Mexico border, and for taking away the children who cross with them.

President Trump claims his administration is only enforcing laws already on the books.  In fact, however, there are no laws that require the separation of children and parents, or that mandate criminal prosecutions of all undocumented border crossers.

Under previous administrations, descretion was granted to Attorney Generals in how they prosecuted individual cases.

The new practice of separating children from their parents was announced by Attorney General Jeff Sessions on May 7, 2018, with the expressed goal of deterring future immigrants.

The children, 100s of which are under the age of 4, are initially held in mass Border Patrol detention centers, created from warehouses, tents or large kennel-like cages.

Miguel Nogueres, a federal public defender in McAllen, Texas, home to the largest immigration processing center, told The Independent that parents are being lied to by Border Patrol agents. They are "told that their children are being taken for a break to play, or bathe, or sleep," without further information of their whereabouts. 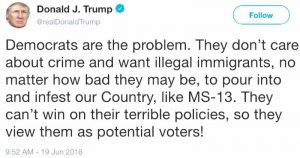 A majority of the families are from Central America, said to be seeking freedom from extreme violence in their native countries.  Trump has further threatened cutting off aid to those that are allowing the migration to the US, including El Salvador, Guatemala and Honduras.

Trump is also under attack for using the children as a bargaining chip to get funding for his border "Wall," forcing lawmakers into negotiatons at the US Capitol today.

At a Monday press conference Homeland Security Secretary Kirstjen Nielsen was unapologetic about the zero tolerance policy, calling it the end of "get-out-of-jail-free cards" for "illegal immigrants" who have used children to obtain asylum. "If an American were to commit a crime anywhere in the United States, they would go to jail and they would be separated from their family." 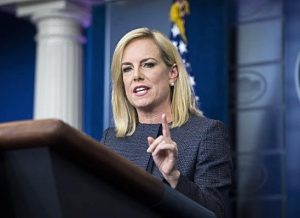 On the same day Attorney General Jeff Sessions cited passages from the Bible in an attempt to establish religious justification for the actions.  Sessions' own church, the United Methodists, filed a compaint against him as a "brother of the church," charging him with "child abuse."

In addition to a letter from 21 state attorneys general, dozens of former federal US attorneys from both Democratic and Republican administrations sent a letter to Trump stating, "As former US Attorneys, we know that none of these condequences nor the policy itself - is required by law.  Rather, its implementation and its execution are taking place soley at your direction, and the unfolding tragedy falls squarely on your shoulders."

All living former US First Ladies have made public comments decrying the policy, including Republican Laura Bush who said, "Our government should not be in the business of warehousing children in converted box stores or making plans to place them in tent cities in the desert outside of El Paso ... (this) policy is cruel. It is immoral. And it breaks my heart." 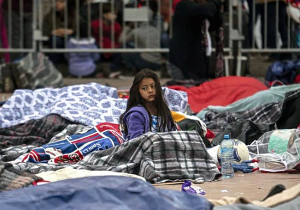 February 1, 2020 The last two days saw the end of the question and answer phase and the end of Democrats’ hope for calling witnesses in the impeachment trial of President Donald J. Trump...