The climate-driven crises in Puerto Rico and the US Virgin Islands, and the devastation done to these US territories by hurricanes, has underscored their federal and political status as non-states.

Unknown to many Americans (and, some say, this administration), the people of these islands are US Citizens who, like states, pay into social security, have their own government and elections, follow federal laws, and can freely travel within the US.

Anyone born in the US territories is automatically granted US citizenship*, and the US government has the same responsibilities toward them as it does to other mainland US citizens.

[*American Samoa, 2,500 miles SW of Hawaii, is a US territory but classified an "overseas possession" since the Spanish American War. Samoans can only claim automatic citizenship if a parent was a citizen.]

Unlike states, however, the territories do not have a vote in Congress, and have no electoral votes in the presidential election.

Each territory sends a Delegate to the US House who possesses all powers, and obligations, of a representative, can debate legislation and sit on committees -- but does not have an actual vote on federal issues.

Similarly, the District of Columbia has a Delegate in Congress, but no voting rights.  They do, however, have three electoral votes in a presidential election. As the nation's capital, DC is a federal district under the direct jurisdiction of the US Congress. Last November DC voters passed, with 79%, a measure supporting statehood. 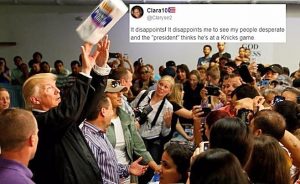 The Trump admistration has been under fire for its handling of aid to Puerto Rico and the territories following Hurricanes Irma and Maria.

The President Trump's comments through the crisis have ranged from accusing Puerto Ricans of criminal mismanagement to engaging in a tweeting war with the Mayor of the devastated city of San Juan, to threatening to cut-off federal assistance.

According to a Politico/Morning Consult poll (10/11/17), only 32% of registered voters think the federal government has done enough in response to Hurricane Maria. 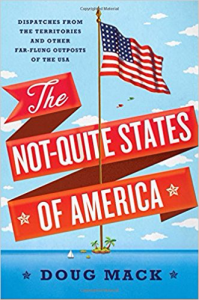 "Puerto Rico survived the Hurricanes, now a financial crisis looms largely of their own making." 10/12/17

"...accountability say the Governor. Electric and all infrastructure was disaster before hurricanes. Congress to decide how much to spend..." 10/12/17

"...We cannot keep FEMA, the Military & the First Responders, who have been amazing (under the most difficult circumstances) in P.R. forever!" 10/12/17

Statehood
Puerto Ricans, who have been US citizens for over 100 years, have held five statehood referenda -- finally voting overwhelmingly in favor of it in June of this year.

That referendum has no legal bearing, however, as the decision to grant statehood is solely in the hands of Congress.

Links
DemDaily: On Puerto Rico and The Jones Act

March 4, 2019 Two more candidates, both from western states, have entered the Democratic presidential contest and quest to take on Donald Trump, or the Republican nominee, in 2020. They are also...

November 9, 2018 Voter on Tuesday sent a resounding message rejecting both President Trump and his policies, and prioritizing their issues for Congress and statehouses. According to exit polls...