On Saturday, for a full 38 minutes, the 1.4 million residents of Hawaii, American citizens, thought their lives were about to be ended by a nuclear missile.

"This Is Not a Drill"
On Saturday, January 14th at 8:00am Hawaii-Aluetian Standard Time, an employee of the Hawaii Emergency Management Agency (HEMA) was conducting a test of the emergency missile warning system and mistakenly pressed the wrong button -- sending a real-life missile alert to cell phones and across television screens to thousands of inhabitants and tourists.

In November a post-Cold War siren warning system was reinstituted as a part of a larger campaign to prepare the state and public for a nuclear attack.

Fueling the Fear
In September 2017 North Korea (officially the Democratic People's Republic of Korea/DPRK) conducted its sixth nuclear test -- a hydrogen bomb that could be fitted to a ballistic missile theoretically capable of striking the continental United States. 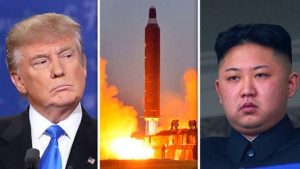 But it is President Trump's escalating exchanges with North Korea's Supreme Leader Kim Jong-un that have fueled fear in the minds of many Americans and allies of a nuclear strike against the mainland.

The October poll followed a September 19th United Nations (UN) speech where the US President called the dictator "Rocket Man" and threatened, if forced, to "totally destroy" North Korea - a nation of 25 million people.  Kim responded by calling Trump "deranged." 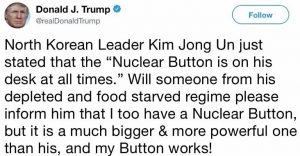 One week prior to Hawaii's false alarm, President Trump taunted Kim with a tweet regarding the comparative size of his "nuclear button."

The Real Deal
Had the alert been real, those scrambling to say goodbye would have had only 15 minutes before impact, and efforts to secure shelter from injury would have been near futile for those within an eight-mile diameter range of the missile's landing.

The physical-damage mechanisms of a nuclear weapon are identical to those of conventional explosives, but the energy produced by a nuclear explosive is millions of times more powerful per gram and the temperatures reached are briefly in the tens of millions of degrees. 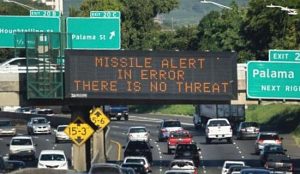 Experts predict the target would be Pearl Harbor, Hawaii, home of the 1941 World War II attack by the Japanese that killed 2,400. Four years later, on August 6, 1945, the US deployed the world's first atomic bomb over Hiroshima, Japan, wiping out 90% of the city and killing over 140,000 people.  A second bomb over Nagasaki three days later, which killed 120,000+ more people and ended the war, marked the last time a nuclear weapon was used in warfare.

The President was at Trump International Golf Club in Palm Beach, Florida, when he received the news around 1:10pm Eastern.  At 5:00pm ET he tweeted -- not to the distraught citizens of Hawaii or a nervous nation -- but to the media. 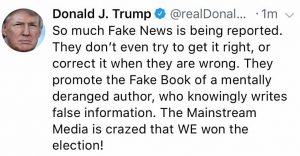 The Nuclear Button
In the event of a nuclear attack, or a pre-emptive strike
by the US, the president has access to the nuclear codes,
as well as having the sole authority to order a strike.
More to come on the Nuclear Button.