Next Tuesday, September 14th, residents of California will vote on whether to recall their current Governor, Democrat Gavin Newsom.

The attempt is the sixth by his opponents to secure a recall of Newsom, a first-term governor who was elected in 2018 with a landslide 62% of the vote, but who has been under fire for his response to the COVID-19 pandemic. 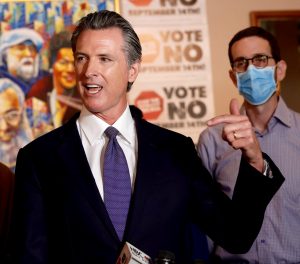 While the election will be only the fourth gubernatorial recall election ever held in the United States, the effort to recall elected leaders is standard fare in the Golden State, where every governor since 1960 has faced a formal recall attempt.

Only one California Governor, Democrat Gray Davis, was successfully recalled in 2003.

The Recall
Under the unorthodox recall system, Newsom could be out if just 49.9% voted for him, shy of the 50+% majority needed for him to retain office. His replacement, however, could be elected on the second ballot with just a plurality and a considerably smaller share of the vote.

There is also confusion around the ballot itself, which asks only two questions: Should Mr. Newsom be recalled? And who should replace him?

If the voter opts for replacing him, then they are presented, in this case, with a cast of 46 potential replacements. 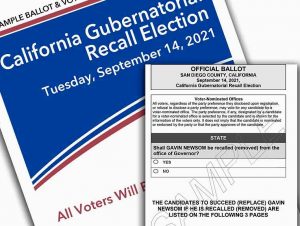 Regardless, a voter is allowed a single unranked vote when choosing a preferred replacement candidate, irrespective of their response to the first question.

If Newsom is removed, then the replacement candidate who receives the most votes is elected to fill out the remainder of Newsom's term. There is no runoff.

Amid the challenging process, Newsom's ballot strategy appears to be -- ignore the second question and focus on the first.

In the 2003 recall election of Davis, the party opted to place another popular Democrat Lieutenant Governor Cruz Bustamante on the replacement ballot as a backup.

The plan backfired, however, when Davis was ousted and Bustamante came in second among the replacement candidates, resulting in the election of actor-turned-politician Arnold Schwarzenegger (R). 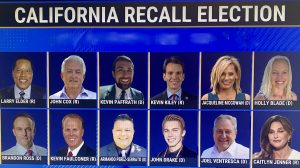 The Replacements
Forty-six candidates qualified to appear on the recall ballot, consisting of 24 Republicans, nine Democrats, two Greens, one Libertarian, and ten no party preference

According to the Suffolk poll, conservative radio host Larry Elder (R) leads the field with 39%, followed by former mayor of San Diego Kevin Faulconer (R) with 5%, YouTube star and financial educator Kevin Paffrath (D) at 5%, former Congressman and 2018 gubernatorial candidate John Cox at 4%. The remainder polled at 2% or less, and 28% were undecided.

Newsom's Advantage
To Newsom's advantage is the COVID-era change to vote-by-mail which ensures that ballots are automatically mailed to every registered, active voter. 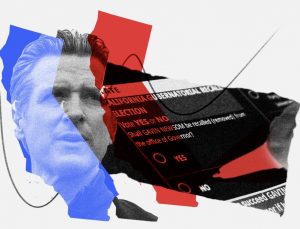 A reported 30% of voters have already cast their ballot in early voting, which began August 16th, and that number is expected to go up to at least 50% by the election's end. In a state where Democrats outnumber Republicans by two to one, and which Joe Biden won by 30%, that gives Newsom an incredible advantage - so long as Democrats can get the vote out.

Newsom and the anti-recall efforts boast a massive fundraising advantage, having raised almost $70 million, about six times the pro-recall side, as is evident in the bombardment of ads on the airwaves and social media to drive voter turnout.

In a special election with no other races on the ballot, however, the bottom line is not persuasion, but mobilization.

Voter Information
Early Vote: By mail began August 16, 2021
Mailed Ballots: Must be postmarked on or before September 14, 2021
Ballot Drop Off: Voters can also return their ballots to a secure drop box by September 14th at 8:00pm
Voter Protection Hotline: 877.321.VOTE (8683)
Track Your Ballot: Here
Voter Palmcard (in English/Spanish): Here
Are You Registered to vote?
Related
DemDaily: Recalling California 7/22/21