California Governor Gavin Newsom declared victory last night over a Republican-led effort to oust him from office, calling it a win for an aggressive pandemic policy and for progressive values over "Trumpism." 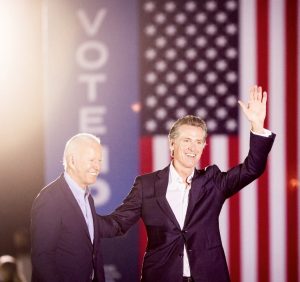 Biden campaigned with Newsom on "No" vote (David McNew)

California is one of 19 states that allow for a gubernatorial recall, and the most permissive, requiring the signatures equivalent to just 12% of the ballots cast in the previous gubernatorial election, compared to most states that set the bar at 25%.

Every Golden State governor since 1960, regardless of party, has faced recall attempts, but only two have garnered enough signatures to make it to the ballot. The last was in 2003 when Democratic Governor Gray Davis was recalled, resulting in the election of actor-turned-politician Arnold Schwarzenegger (R).

Under the unorthodox recall system, voters were asked two questions: Should Mr. Newsom be recalled? And who should replace him?  If the voter opted for replacing him, then they were presented with a list of 46 potential replacements, any one of which could have won by a mere plurality.

Of the ballots cast for replacement candidates, ultra-conservative talk radio host Larry Elder, who President Joe Biden called "the closest thing to a Trump clone I've ever seen," secured 47% of the vote, 38 points ahead of the next Republican, establishment candidate and former mayor of San Diego, Kevin Faulconer.

That margin is almost identical to the vote margin.

The "no" vote also won out with most demographic groups. Exit polls show that majorities of both men and women, voters of all age groups, and majorities of White, Black, Asian and Latino voters all voted against the recall. 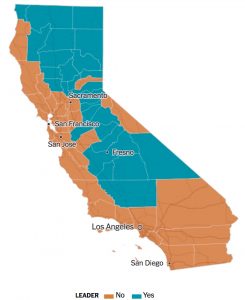 Any special or mid-year election is closely watched as a barometer of political messaging and geographic strength, particularly by the party in the White House. Even more so when the election is in California, which represents 12.5% of the US population.

Newsom's blue wave, apparently ridden on his handling of the pandemic, is good news for Biden, who has seen a dip in his overall job ratings, but still scores above 50% on his top priority, fighting COVID.

While Elder's echo of Trump's rigged election claims and anti-vaccine mandate, anti-woman, anti-worker agenda may have hit home with conservatives, its ineffectiveness in moving moderates and independents away from Newsom should be a warning sign to the GOP ahead of the mid-term elections.

Although the numbers are likely to close some, the margin of Newsom's victory, which exceeded his already historic election win of 61% in 2016, means he is well-positioned for reelection in 2022 -- along with $24 million in the bank and an energized army of online volunteers.

As California accepts election-day postmarked mail-in votes for seven days after the election, the full results of the recall may not be final until the end of the month.

DemDaily: Off to the Races!

The 142nd running of the Kentucky Derby is this Saturday, May 7th, providing a welcome reprieve from the 24 hour presidential “horse race.”

November 6, 2020 While the country awaits the outcome of the presidential, possibly in the next 24 hours, the balance of power in the U.S. will not be determined for another two months. Status of...