The first round of results for yesterday's New York primary elections are in, but the final outcome of many races, including the New York City mayoral election, will not be known for weeks. 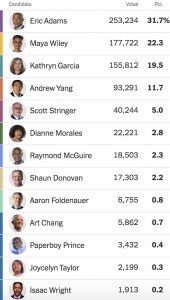 With the city's new ranked choice voting system, however, the final results are far from being determined.

Ranked Choice Voting (RCV) is an electoral system in which voters rank their preference of candidates on their ballots. If no candidate wins 50%+ in the first round, the candidate with the fewest votes is eliminated. The votes of the eliminated candidate are then reallocated to the second choice of the last-place finisher's voters. The process is repeated until a winner is declared from the final two. 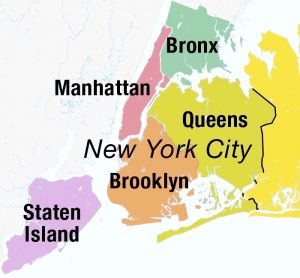 Other Elections on The Ballot
In the other two citywide contests, incumbent Jumaane Williams won renomination as Public Advocate outright with 71% of the vote.

In the primary race for City Comptroller, which will go to a second round, City Council Member Brad Landers secured 31.4% of the first choice preferences, followed by City Council Speaker Cory Johnson with 22.6% and former CNBC host Michelle Caruso-Cabrera with 13.6%.

In other New York Mayor primary elections, incumbent mayors in Albany, Buffalo, Rochester and Syracuse all face challengers in their bids for reelection.

In Albany, two-term Mayor Kathy Sheehan cruised to a primary victory with 61.44%, while embattled two-term Rochester Mayor Lovely Warren lost in a landslide to city council member Malik Evans who won with 66.03% of the vote. 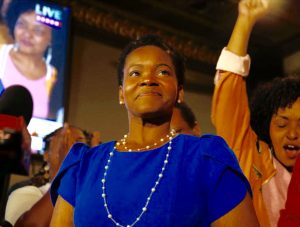 In Buffalo, four-term Mayor Byron Brown lost to community activist and registered nurse India Walton, who is on the verge of becoming Buffalo's first female, and first Socialist, mayor. Walton defeated Brown 51.85% to 44.83%.

In the deeply blue Buffalo, Rochester and Albany seats, Democrats are expected to win in November.

The race for Mayor in Syracuse, however, is expected to come down to a tight contest between political Independent and first-term Mayor Ben Walsh, and the Democratic nominee.

In the Democratic primary, Syracuse Common Council member Khalid Bey leads fellow Councilor Michael Greene 49.85% to 49.01%, a margin of just 46 votes, with more than 500 absentee votes still to be counted.