After the last few weeks, we had to mix it up a bit. 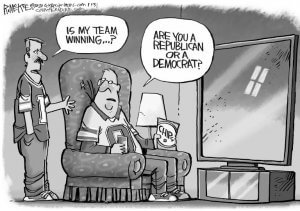 Qualifications
1) Meet a Delegate Threshold of having been allocated at least one pledged National Convention Delegate from the February 3, 2020 Iowa caucuses or 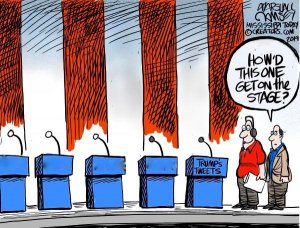 On Iowa
Technical problems with an app held up the Iowa caucus results, and by Tuesday it still wasn't clear who had won. "At one point they called Florida for help." -- Jimmy Fallon 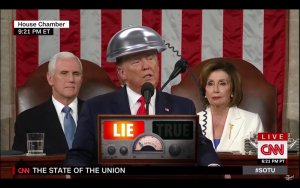 Worth Watching: Jimmy Kimmel's Take on SOTU and Iowa (Click)

"And I guess, what do you expect? I mean, the average age of the party leadership is like 85 years old, all right? What do they know about apps? The only thing they know about apps is can you get one free with the early bird special, that's it." -- Trevor Noah

"The trouble is, most elderly volunteers had a hard time downloading it onto their garage door openers." -- Stephen Colbert

"And hey, what kind of weirdo antiquated system are the caucuses anyway? It's like the musical chairs meets debate class meets a slow gas leak." -- Seth Meyers

On Trump's SOTU
"As you saw, the president stood before a joint session of Congress to deliver the State of the Confederacy - I mean Union. And the speech was exactly what you might expect from Donald Trump and a teleprompter: Not a great fit. It was a self-congratulatory speech. In the first 10 minutes, Trump used the word 'I' more than all of LensCrafters does in a whole year." -- Jimmy Kimmel 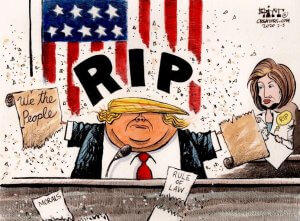 "One of the funnier interactions, or lack thereof tonight, was Mike Pence and Nancy Pelosi standing side by side, not talking to each other for the whole time, which was kind of rude on his part because she tried really hard to make him president." -- Jimmy Kimmel

"And as always, the president invited some special guests to the gallery, with inspiring stories of enduring unimaginable hardship. For instance, Melania." -- Stephen Colbert

On Romney's Vote
"Who would have thought that the most bad-ass Republican in the Senate would end up being a Mormon dude named Mitt?" -- Trevor Noah

"Romney was actually choking back tears as he explained his decision because - well, because he knows the president is about to order the space force to attack his home state of Utah." -- Jimmy Kimmel 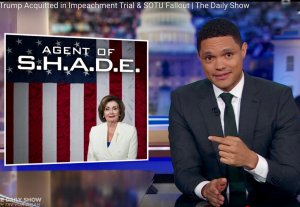 Worth Watching: Trevor Noah on SOTU and Pelosi (Click)

"Yes! That's what the impeachment managers were saying the whole time! Someone was actually listening to the substitute teacher Mr Schiff! You got through to the tall quiet kid who has trouble making friends!" -- Stephen Colbert

On Nancy Pelosi Tearing It Up
"After President Trump gave his State of the Union address, House Speaker Nancy Pelosi tore it in half. Tore in half! Crazy. Yeah. Yeah. Then Melania said, 'Great, now do my prenup.'" -- Conan O'Brien

"Needless to say, Mike Pence was very upset by this act of defiance against Master. He described it as a new low. I guess he forgot about the time his boss invited the Taliban to Camp David." -- Jimmy Kimmel

"So between Pelosi and J.Lo, women over 50 are tearing it up this week." -- Jimmy Fallon

SignUp for Daily updates on the issues, politics and the players
Forward and Follow on Facebook, Twitter and LinkedIn
DemList relies primarily on individual contributions for support.
Please help with $25, $50 or $100 here!