For those who missed Friday's column - see all you need to know tomorrow's Total Eclipse - including new links and apps on where and how to watch.

Monday, August 21st, Americans from every corner of the country have the opportunity to see one of nature's most awe-inspiring sights - a Total Solar Eclipse!

What is an Eclipse?
There are two types of eclipses seen from Earth - eclipses of the moon (lunar) and of the sun (solar).

Lunar eclipses of the moon happen at night, and can be seen by half the world at the same time.

Solar eclipses can only occur during a New Moon when the Moon moves between Earth and the Sun and the 3 celestial bodies form a straight line - Earth-Moon-Sun - blocking all or part of the sun. 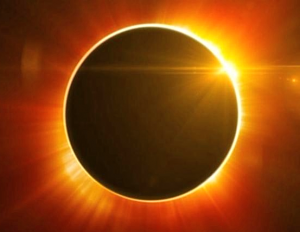 A total eclipse is a rare and beautiful site. This will be the first time the contiguous United States has seen a total eclipse since 1979!

Cool Things to Watch For
#1  Animals getting confused: The change in light makes animals think and act like it is night.
#2  Stars and planets in the middle of the day, as bright as they would during the evening!
#3  Shadow bands: Right before a total eclipse, little snake-like shadows may appear to slither across the ground, caused by light from the eclipse being focused and refocused through air cells in the atmosphere.
#4  Bailey's beads are pearls of sunlight shining through the valleys and mountains of the moon. You will see them around the edges of the moon as it passes over the sun.
#5  Corona Rainbows around an eclipse are caused by light shining through water vapor. Very cool.
#6  360-Degree Sunset: During totality, you see what looks like a sunset - in every direction! 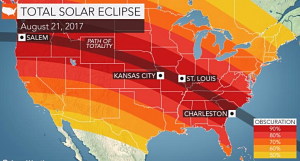 Who can see it?
All of North America plus parts of South America, Africa, and Europe will see at least a partial solar eclipse, which is when the where the moon covers part of the sun's disk.

Those who are viewing from the path of totality, where the moon will completely cover the sun and its atmosphere, will see a total solar eclipse.

The path of totality, which is about 70 miles wide, will pass through portions of 14 US states, stretching from Lincoln Beach, Oregon to Charleston, South Carolina.

The Totality Path
Where you can witness a Total Solar Eclipse
Source: NASA. Seconds may vary Depending on Location