In a victory for a free and open internet, the US Senate voted yesterday to repeal the Trump administration's rollback of Obama-era net neutrality rules.

Democrats were able to force the vote under the Congressional Review Act, which allows Congress, with a simple majority vote in both houses, to pass a joint resolution and overturn recent agency decisions. 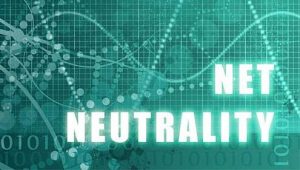 Background
In February of 2015, on the recommendation of President Obama, the FCC passed the Open Internet Order, which reclassified broadband internet service as a telecommunications service. In doing so, it prohibited internet service providers (ISPs) from restricting the flow of data to and from websites, or segregating the internet access by cost -- therefore preserving net neutrality.

The historic 2015 regulation established "net neutrality" as the internet's guiding principle and the law of the land.

In December of 2017, the FCC, under new Chair and Trump appointee Ajit Pai, voted 3-to-2 along party lines to repeal the Open Internet Order, claiming it constituted regulatory overreach by the FCC at the time.  Supporters of the repeal hailed it as a victory for investment and innovation.

Fallout
The action was immediately decried as a violation of the First Amendment's right to free speech by denying equal access to any part of the internet to any individuals, based on their ability to pay.

Twenty-one states and DC subsequently filed lawsuits against the action.

What Now?
The Senate vote, however, was largely symbolic for now as it still has to go through the House.

That will require a simple majority of 218 to force a vote, which means securing the support of all 193 Democrats and 25 Republicans in the GOP-led House.

A companion resolution has already been introduced in the House by Congressman Mike Doyle (D-PA).

Regardless of the immediate outcome, the bi-partisan support for the issue among voters themselves could prove to be an advantage for Democrats at the ballot box in November -- particularly among younger, internet-savvy millennials.

April 22, 2022  Mask Mandates have been lifted nationwide across the country’s transportation systems, including on planes, trains, and automobiles. On April 18, Florida US District Court...

July 23, 2018 Among the numerous legal cases involving President Trump, three lesser known suits concern the President’s violation of the “Emoluments Clause” of the US...