This Friday, at 10:00am, students in more than 2,500 schools in four time zones will walk out of their classrooms and observe a moment of silence for victims of gun violence.

The walkout marks the 19th anniversary of the April 20, 1999 Columbine High School massacre in Colorado, where 12 students and a teacher were killed. 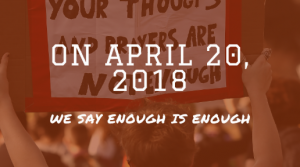 Tomorrow's National School Walkout differs from the March 14th Walkout, when close to one million students walked out of their classrooms for 17 minutes -- one for each of the 17 people killed at Florida's Marjory Stoneman Douglas High School by a fellow student with an AR-15 semi-automatic rifle.

But unlike that walkout, students Friday will continue with actions through the rest of the day -- in protest of lawmakers' failure to pass responsible gun legislation, including visits to local lawmakers, staged open-mic time for students to share concerns, and registering students and citizens to vote. 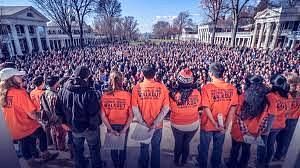 Their Mission
"National School Walkout is a movement powered and led by students across the country.  We're protesting congressional, state, and local failures to take action to prevent gun violence.

America is the only country in the world where so many people are killed by guns, and yet our leaders do nothing about it. In many states it's more difficult to register to vote than it is to buy a rifle. Apparently to some politicians, a vote is scarier than a gun."

Find A National School Walkout: Join one of the 2,569+ events 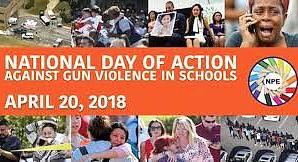 The April 20th walkout also follows the March for Our Lives, organized by Parkland school shooting survivors and their families, held on March 24th in DC and over 800 sibling marches across the country and around the world.

The youth of our country are speaking and, according to them, if legislators don't listen, "our young people will show them the consequences of letting so many Americans die by voting them out in November."

July 1, 2020 Although there are only five presidential primaries left in the season, over half of the regularly-scheduled state primaries for statewide executive offices, legislature and...