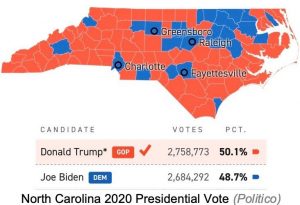 The open seat being vacated by retiring Republican Senator Richard Burr is now among the country's top ten Senate contests as we countdown to the 2020 midterms -- just three weeks away.

Tar Heel State Politics
North Carolina has voted for the Republican candidate in nine of the last 10 presidential elections -- with the exception of Barack Obama in 2008.

While the voters may favor the GOP in presidential elections, they have voted for a Democrat for governor in all but four years this century.

Similarly, while Democrats dominated the state's two US Senate seats in the first half of the 1900s, North Carolinians have split their vote between the parties since the early 1970's, with no Senate race having been won with more than 55% of the vote. 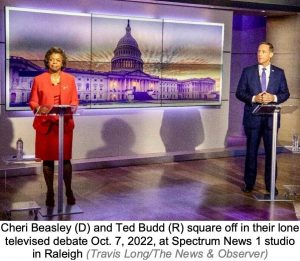 In the increasingly polarized state, Trumpism has a significant hold on the Republican Party. When Burr, their three-term US Senator, voted for Trump's second impeachment, the state GOP Party censured him.

Budd, who is a three-term member of the conservative House Freedom Caucus, was endorsed by Trump in June, 2021, almost a year before the primary. The announcement came as a snub to former Republican Governor Pat McCrory, who objected to Trump's efforts to overturn the election, accusing the former president of "destroying democracy."

Beasley, who would become the first Black senator from North Carolina, served on the state's high court from 2012 to 2020, including almost two years as Chief Justice. She previously served as a judge on the North Carolina Court of Appeals and on the 12th Judicial District Court, where she had been an assistant public defender. She swept the Democratic primary with 81.1% over nine minor opponents.

The issues in the race reflect much of that in the national discourse. In a September 28-October 2, 2022 SurveyUSA/WRAL poll, 44% of voters ranked the economy as the most important issue, and those voters supported Budd by a nearly 2-to-1 margin. 9% chose health care and 8% indicated immigration.

17% of voters, however, said abortion is the most important issue following the Supreme Court’s overturning of Roe v. Wade. Those voters backed Beasley by 67%. Budd has signed onto a US House bill that would ban abortion after 15 weeks of pregnancy nationwide.

In the same survey, more than 4 in 10 voters said Trump’s endorsement of Budd makes them less likely to vote for him, compared to 30% who said it increases the likelihood they will support Budd.

Budd's campaign reported raising $4.77 million during the three months ending September 30, one-third of the $13.36 million that Beasley raised during the same period. For the entire election cycle, Beasley has raised $29.4 million compared to $11.1 million for Budd. 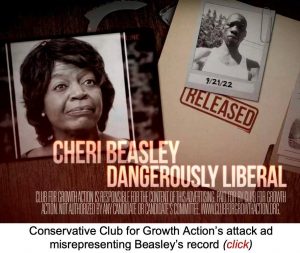 Outside Republican groups, however, are making up the difference. The Senate Leadership Fund, associated with Minority Leader Mitch McConnell (R-KY), has spent $24.7 million on advertising against Beasley. Another $6.5 million has been spent by the National Republican Senatorial Committee.

On the Democratic side, the Senate Majority PAC, associated with Majority Leader Chuck Schumer (D-NY) has spent over $10.5 million against Budd or for Beasley, has reserved another $4 million in TV advertising and announced it was investing $8 million more in the state.

Numerous other PACs are investing heavily as well, including the conservative Club for Growth Action and the National Federation of Independent Business for Budd, and EMILY's List and the Human Rights Campaign, for Beasley.