Last Friday the Trump administration announced its latest in a series of rules that rollback women's healthcare and reproductive rights - by expanding the rights of employers to deny women insurance coverage for contraception.

It is also another attack on the Affordable Care Act (ACA) or "Obamacare", which Trump and the Republican Congress have tried repeatedly, and unsuccessfully, to repeal.

Background
Obamacare, signed into law in 2010, mandates that all employer insurance plans cover at least one form of contraception (of 18 FDA-approved methods) without a patient co-payment. Religious organizations and some closely-held, for-profit companies, can apply for exemption.

If an employer qualifies for exemption, the government makes arrangements for a third-party insurance company to guarantee coverage for that company's employees.

A 2015 Health Affairs report showed the Obamacare mandate covers an estimated 55 million women, reducing their out-of-pocket spending by 50%, and saving them $1.4 billion. The mandate has also guaranteed treatment for related healthcare conditions and has led to an historically low number of abortions.

Friday's administration rule, announced by the Department of Health and Human Services, states that any employer or insurer can stop following the ACA's contraception mandate if they have moral or religious objections to providing birth control to employees.  This includes any nonprofit, small business, large private or publicly-held corporation, school, or other entity. 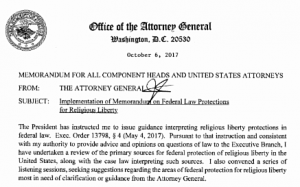 Planned Parenthood estimates that a total of 62 million women, roughly 38% of the US female population, will be affected by the new Trump administration rule - which takes effect immediately.