In another dramatic development in the investigation of the President of the United States, Special Counsel Robert Mueller broke his silence for the first time since his March 22nd report was released.

Mueller's Moment
Indeed, Mueller has not spoken publicly since May 17, 2017, when he began the 22-month tightly controlled investigation, which resulted in 38 indictments or convictions, 215 criminal charges, and five prison sentences. 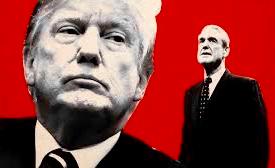 In emphasizing specific sections, Mueller drew an unspoken, but clear contrast to some of the conclusions drawn by Attorney General William Barr's four-page summary of the report, released March 24th. Chief among those was Barr's claim that the report exonorated the President of corruption.

Barr came under immediate fire for the mischaracterization, given the damning evidence against the President subsequently revealed in the report. Barr was also condemned for his decision to release his own conclusions, rather than defer to Congress, as is the precedent, and one that is alluded to in the Mueller report.

Mueller's stated reason for the press conference today was to announce the closing of the Special Counsel's office and his resignation from the Department of Justice to return to private life. He also, however, wished to remark on the report.

Mueller's Takeaways
Saying that the Special Counsel "office's written work speaks for itself," he provided a brief but pointed overview, moving quickly to the main conclusions of the report.

On Volume One, which focuses on Russian Interference in the 2016 Presidential Election, Mueller stated:

"As alleged by the grand jury in an indictment, Russian intelligence officers ... launched a concerted attack on our political system (and) used sophisticated cyber techniques to hack into networks used by the Clinton campaign. 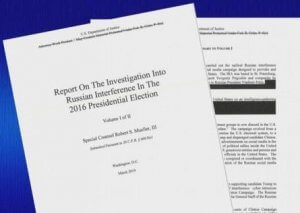 They stole private information and then released that information through fake online identities and through the organization WikiLeaks. The releases were designed and timed to interfere with our election and to damage a presidential candidate. At the same time ... a private Russian entity engaged in a social media operation where Russian citizens posed as Americans to influence an election."

"The indictments alleged, and the other activities in our report describe, efforts to interfere in our political system. They needed to be investigated and understood."

While Mueller's accounting served as both condemnation and, perhaps, warning of the severity of Russia's action, it also cleared Trump of conspiracy.

"The report details numerous efforts emanating from Russia to influence the election. This volume includes a discussion of the Trump Campaign's response to this activity, as well as our conclusion that there was insufficient evidence to charge a broader conspiracy."

On Volume Two, which focuses on potential obstruction of justice by the President, Mueller stated:

"The matters we investigated were of paramount importance ... When a subject of an investigation obstructs that investigation, or lies to investigators, it strikes at the core of the government's effort to find the truth and hold wrongdoers accountable."

Mueller also made it clear that the only reason they did not charge the president was because "it was not an option we could consider" under DOJ's policy.

"We did not, however, make a determination as to whether the president did commit a crime ... (because) under longstanding department policy, a President cannot be charged with a federal crime while he is in office. That is unconstitutional." 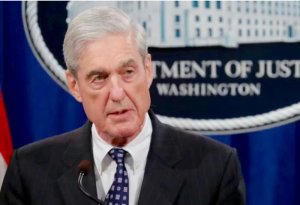 In his first, and possibly only, pubic statement, Mueller was a powerful presence

Mueller noted, however, that the DOJ's policy opinion "explicitly permits the investigation of a sitting president because it is important to preserve evidence while memories are fresh and documents available. Among other things, that evidence could be used if there were co-conspirators who could be charged now."

In what was perceived as a nod to Congress, Mueller went on, "The opinion says the Constitution requires a process other than the criminal justice system to formally accuse a sitting president of wrongdoing."

"It would be unfair to potentially accuse somebody of a crime when there can be no court resolution of the actual charge. ..Those were the principles under which we operated. From them, we concluded we would notreach a determination one way or the other about whether the president committed a crime. That is the office's final position."

On the subject of an appearance before Congress, Mueller stated that "any testimony from this office would not go beyond a report...The report is my testimony."

After thanking his team and professional staff, individuals of "the highest integrity," Mueller concluded:

Let's see if it gets the attention of Congress.